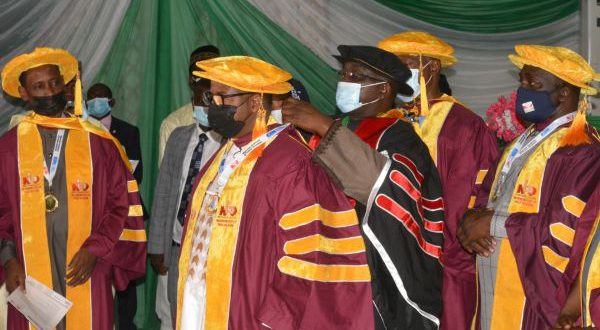 The Executive Governor of Bauchi State, Senator Bala Mohammed has been vested as a Patron of the Nigerian Institute of Public Relations, in line with the provisions of Decree 16 of 1990, now an act of parliament.

The investiture was performed by the President and Chairman of Council of the Nigerian Institute of Public Relations, Mallam Mukhtar Sirajo as part of activities marking the Annual General Meeting of the Institute, which was held recently at the Command Guest House, Bauchi. Apart from the investiture, the Governor was also conferred with the Honorary Fellowship of the Institute, which is the highest cadre of membership. The President also noted that the decision to confer the prestigious Honorary Fellowship Award on Senator Bala Mohammed is as a result of his support and outstanding contributions to the development of Public Relations in Bauchi State as evidenced by his giant strides which is a symbol of the dividends of Democracy in Bauchi State.

According to the President, Senator Bala Mohammed earned the investiture, as the Institute is usually quite reluctant to perform the function on just any governor, although the law allows it. He commended the Governor for remaining focused on delivering on his electoral promises despite daunting challenges from virtually all sectors.

The President further said that the Institute has put on the front burner, the total professionalization of Public Relations, both as a unique profession in its own right, and as an industry generally, noting that the fight against quackery and other misconducts are beginning to bear fruits. He also called on the Governor to direct all Bauchi State officers as well as those working in the public service in various Public Relations Departments to register with, and henceforth participate in the activities of the Institute, as the law establishing the Institute makes it a criminal offence for anybody to practice Public Relations without being a member of the NIPR.

In his response, the Bauchi State Governor, Senator Bala Mohammed thanked the President and the Institute for bestowing on him the great honour, saying that it is both relevant and timely because it will serve to motivate him to further put in his best in the service of the state. He said the award would also serve to facilitate and enrich democracy, democratic culture and the consolidation of dividends of democracy. He stated further that the acceptability of his administration by the people of Bauchi State is purely based on the developmental programmes and the transparent nature of the leadership displayed.

Also, the Nigerian Institute of Public Relations has inaugurated a new Council at the just concluded Annual General Meeting held in Bauchi. The inauguration was performed virtually immediately after the Council elections by the Hon. Minister of Information and Culture, Alh Lai Mohammed, in line with the statutes of the Institute.

The President and Chairman of Council, Mallam Mukhtar Sirajo also conferred the prestigious Fellowship Award, the highest membership cadre, on 21 deserving members of the Institute during the Annual General Meeting in Bauch.