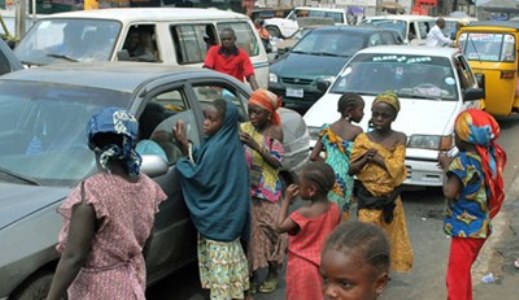 Unarguably, Nigeria is Africa’s most populous nation with more than 170 million people out of which Lagos State boasts of 20 million inhabitants, thus making the City the nation’s biggest urban ­agglomeration.

Population surge in Lagos has largely occasioned by the influx of people from different parts of the country.  Lagos has to contend with various socio-economic challenges peculiar to cities with exponential growth.

With the current economic situation in the country, the trend of begging in Lagos has now become quite worrisome with able-bodied men actively engaged in it. The increasing population of beggars in the Lagos metropolis has become an eyesore and the situation has become alarming because they now constitute environmental hazards as well as security threats. There have been instances when a few of these beggars were discovered to be agents of criminals.

But despite the resolve by the Lagos State government to clamp down on beggars soliciting for alms all over the roads, it appears beggars can’t just be caged, as they daily overwhelm motorists and pedestrians on major streets and roads with their harassing demands.

READ ALSO: Sex In The City: The New Face Of Prostitution In Ibadan (EXCLUSIVE)

The practice is, however, contrary to Section 166, sub-section 1 (b) of the Lagos State Criminal Code, which prohibits street begging, with penalties for offenders

Everywhere you go in Lagos, beggars await you; using different strategies, they gesture on you for one favour or the other. In some areas, you might be tempted to conclude that it is the only lucrative “business” in town. From the mainland to the island, they are on the streets, at every corner, on the major roads, under the flyovers, swarming around vehicles in traffic, and you can hardly miss them as they call on passersby to take pity on them.

Street begging and destitution in Lagos State remain unpleasant features, and various efforts by the government to exterminate them – including making it a criminal offence – remain largely futile

Finds revealed that besides the nuisance they constitute for the state, they also expose themselves to various risks, and – for those who use their infants and adolescents to generate income – are inadvertently guilty of child abuse.

Findings reveal that child beggars are not always alone on the job, as some of their parents or bosses were found to be hiding at corners surreptitiously watching how well their wards were doing at the begging assignment.

At Ile-Epo Market in Agbado area of Lagos, begging takes place in different shades and forms. Three young men were seen dropping sick people, including the old and handicapped, in the middle of the busy Lagos-Abeokuta Expressway. They use the sick people to attract the attention of passersby while soliciting alms.

But one thing that puts people off, according to residents, is how they display these sick people with nauseating wounds. Many of them are simply an eyesore. Diseases such as elephantiasis, prostate cancer, even severe burns and many other disgusting conditions and malodorous wounds are displayed to appeal to people and torment the emotions of passersby. Such scenes are common features at busy bus stops and other places across the state.

A student at the University of Lagos who pleaded anonymity said that his friend does not take a particular route to the campus because of a particular man begging with a decaying sore stationed along the way.

“If you see the sore, you will not be able to eat for days. This man has been there for many weeks. He doesn’t cover the wound with anything. You see flies feeding on it. People who are easily irritated can easily throw up at such sights,” he said.

Some motorists have maintained that beggars have become a public nuisance and called on the government to do something about them.

“There was a time we were held up by the traffic light around the Government Reservation Area, on Isaac John Street, Ikeja, and this boy just came with his water and brush. I immediately stopped him but he refused and insisted on washing my windscreen. In the process, I almost hit the car in front of me because I was arguing with him. That is what beggars have turned to. I believe the government should do something about it”, said a motorist.

According to a businesswoman, Theresa Adetayo who related her experience with the child beggars, she has seen the children and their parents on a number of occasions counting their money at the end of each day. And what a bounty they always count, Adetayo said.

She added that she was not disposed to giving the child beggars alms because it baffles her that, despite the economic situation and its attendant effects on families, the parents of those children can’t still control their procreative proclivities. She said she was irked by the seeming mentality of those parents that members of the public would always be there to feed their families through almsgiving. Adetayo stated that those parents rub it in by sitting down lazily somewhere on the road feeding new babies, while the beggar-children solicit for money that would “massage their (parents) laziness and stupidity”.

“The older ones move about looking for whom to disturb, while the mother sits with a baby in her hand and uses that small child as a decoy to lure people into giving her money,” she said.

But  in a renewed effort to tame the rampaging beggars and curtail the social menace, the Lagos State Commissioner for Youth and Social Development, Mrs Uzamat Akinbile-Yusuf, recently appealed to members of the public to cooperate with the state government to only give alms to the less privileged in the society through registered charity homes and other socially responsible organisations.

She vowed that the state would continue its clampdown on perpetrators of the social menace, noting that, beyond prosecution, the government has provided rehabilitation and training centres where those rescued from the streets would be engaged in mental re-orientation and vocational skills training.

Similarly, Ambode, after one of the state executive council meetings in mid-2017, condemned the prevalence of street begging, saying that some unscrupulous persons hide under the guise of seeking alms to rob members of the public.

“We have had security reports on the activities of persons who pose as beggars, especially in traffic, but their sole aim is to perpetrate evil. We are putting a searchlight on this trend and one way to do that is to ensure that we take pre-emptive measures to forestall this development,” the governor said.

No doubt, the menace of beggars on the streets of Lagos has reached an alarming dimension. This is in spite of regular rescue operations carried out by the rescue team of the state’s Rehabilitation Department. Beggars of different categories and destitute have continued to be common sights across the state with resultant negative effects on traffic management.

A resident who pleaded anonymity told the reporter that professional beggars have honed their act so well that unsuspecting members of the public can’t but part with some money in their pockets.

“As a security person, I have been at this Allen branch of our bank for over five years and I see these different tricks that beggars use to solicit alms. Sometimes, they feign fainting spells, cardiac attacks, asthmatic attacks and the like to simply get the attention of passersby and eventually get them to part with some change.

“Some of them have been doing it, moving from one place to another, for many years. There is a particular woman who will always say she is stranded and needs N100 as transport fare to get home. In the last three years or so that I have been seeing her, always neatly dressed and carrying a black polythene bag, she is still asking for N100 from people. We drive some of them away once they come near the bank premises because we know their tricks,” he said. 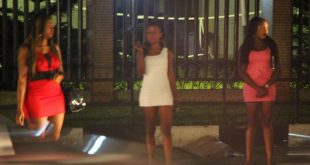 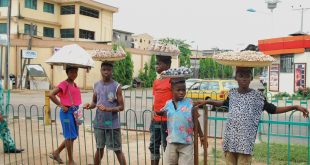