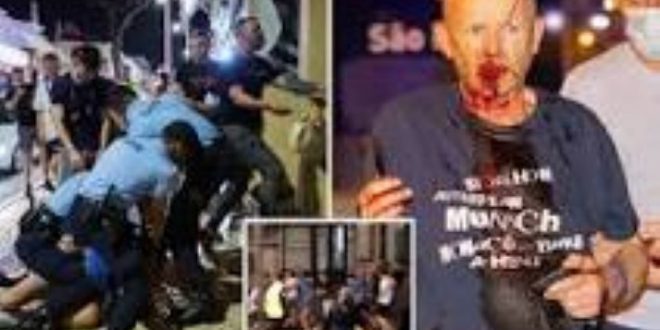 Shocking images show brawls between Man City and Chelsea fans as they gather in Porto ahead of the Champions League final.

Hundreds of fans are already in Portugal for Saturday’s big game featuring the two English teams.

However, tempers have boiled over as supporters booze at local bars in the city.

One clip shows two small groups of fans scuffling outside a boozer including two lads who exchange punches and kicks.

Others at the bar throw drinks at each other before police officers with batons disperse the crowd.

Pictures from earlier on Friday also show fans brawling in the centre of Porto before the European Cup final.

Thursday saw the second night of violence in the city as riot cops had to disperse brawling fans as staff closed pubs due to Covid restrictions.

A number of supporters were not aware of the strict 10.30pm drinking curfew to prevent the spread of the coronavirus, reports the Mirror.

People were involved in clashes with police officers, it has been reported.

Two fans were reportedly injured after shameful clashes near Porto’s Sao Bento railway station and in the city’s riverside quarter.

One Chelsea fan was pictured drenched in claret as blood poured from his mouth which had been busted open.

A witness said: “It was pretty minor – some people wanted another drink and the police were determined to move people on and back to their hotels.

“There was no trouble between Chelsea and City fans.”

Trouble is also said to have flared after City fans started taunting holidaying Manchester United fans whose team had just gone out on penalties to Villarreal in the Europa League final.

Police sources said incidents of fighting had been resolved “quickly.”

Manchester City brushed aside PSG in the semi-finals to reach their first ever Champions League final.

Chelsea beat 13-times European champions Real Madrid to book their place in the last round – which is their third appearance in a CL final since Russian billionaire Roman Abramovich bought the club in 2003.

UEFA moved the big match from Istanbul to Portugal to allow English fans to travel due to the surging number of cases in Turkey.

Some 16,500 fans will be allowed into the stadium. Many others have come to support their teams outside.

Police commander Paula Peneda told reporters authorities were expecting many English fans without a ticket in the city on Saturday but could not specify a number.

Officials said they could not stop fans moving around because British tourists are now allowed in and out of Portugal if they present a negative PCR test.

Charles Igbinidu is a Public Relations practitioner in Lagos, Nigeria
@https://twitter.com/ionigeria
Previous Goodluck Jonathan facilitated the release of Mali’s President, Prime Minister from detention
Next REVEALED: Covid-19 was created by Chinese scientists in a Wuhan lab before orchestrating an elaborate cover-up