MANCHESTER UNITED have been revealed to be the most valuable club in the Premier League.

A study by Sportico has shown that sides’ values have significantly risen due to the total worth of the Premier League’s media rights increasing. 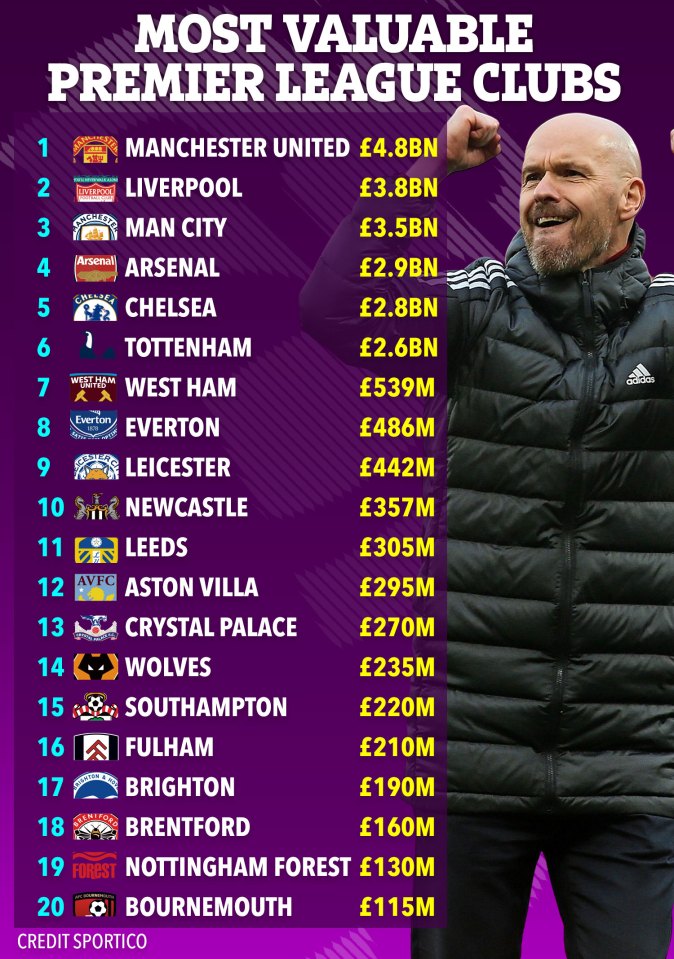 Value of clubs have also been boosted with the return of fans to stadiums following the Covid-19 pandemic.

During the pandemic, revenues dropped due to games having to be played behind closed doors.

Now the study has revealed the value of the Premier League clubs with the Red Devils coming out on top with a value of £4.8billion.

They beat rivals Liverpool to the top spot, with the Anfield side coming in at £3.8bn.

It is an important time for the clubs to learn their value as both of them have been put up for sale by their owners.

United’s owners, the Glazers, want to sell their shares in the club by March and have their own price tag of £7bn.

One interested party is Sir Jim Ratcliffe, a United fan.

Liverpool’s owners, FSG, have recently decided to only sell a minority of their shares in the club instead of a full sale

The Gunners overtook London rivals Chelsea, who now sit in fifth, despite the takeover of owner Todd Boehly with a £4.25bn bid.

That bid appears to be well over the value of the club, with the study valuing the Blues at £2.8bn.

Tottenham are the only other side to be valued in the billions, with the club’s estimated value of £2.6bn.

The rest of the top ten sees London Stadium tenants West Ham as the most valuable club outside of the ‘Big Six’ at £539million.

Crisis club Everton are valued at £486m, Leicester City at £442m and Saudi-owned Newcastle at £357m.

Cristiano Ronaldo and Al-Nassr dumped out of Saudi Super Cup