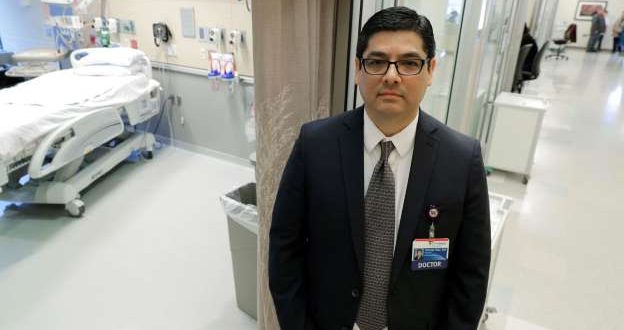 In this photo taken Jan. 23, 2020, Dr. George Diaz, section chief for infectious diseases at Providence Regional Medical Center, poses for a photo in Everett, Wash. Diaz was part of the team that treated the first U.S. patient infected with the new virus from China

SEATTLE (AP) — The man who became the first U.S. patient infected with the new virus from China has left the hospital and said in a statement that he is getting better and looking forward to life returning to normal, according to a statement from the man provided to The Associated Press on Monday.

The 35-year-old man thanked his doctors, nurses and other staff at Providence Regional Medical Center in Everett, Washington, about 30 miles (48 kilometers) north of Seattle, according to the statement from the unidentified man given to the AP by hospital officials.

The unidentified man fell sick after returning home from a visit to China and was admitted to the hospital on Jan. 20. He was still there as of last Friday and is now in isolation at home, monitored by officials with the Snohomish Health District in coordination with the hospital.

“I am at home and continuing to get better,” the man said. “I ask that the media please respect my privacy and my desire not to be in the public eye.”

The man added in the statement: “I appreciate all of the concern expressed by members of the public, and I look forward to returning to my normal life.”

The hospital has been coordinating with U.S., state and local health officials about the man’s care.

The hospital declined to provide information about when he was discharged or the process of his discharge from the hospital.

Charles Igbinidu is a Public Relations practitioner in Lagos, Nigeria
@https://twitter.com/ionigeria
Previous “Nobody eats GDP” says African Development Bank President as he calls for inclusive growth
Next Kaduna Winners’ Chapel bombing suspect told us his name was Mohammed, not Samuel –CAN