Kwara State command of the Nigerian Security and Civil Defence Corps (NSCDC) has uncovered a den of ritualists located at Aleyo settlement, along Ojoko Road, Off Afon community in the Asa LGA of Kwara state. 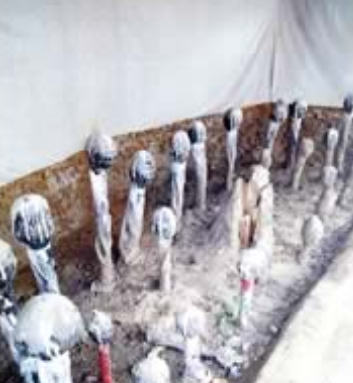 In the operation led by the commandant of the Corps, Ayinla Adeyinka, on Monday, two alleged ritualists were also arrested for alleged involvement in rituals and obtaining money under falsehood.

The discovery and arrest followed a complaint by one of the victims, Abdulrahman Mumini, who had allegedly been duped to the tune of an accumulated amount of N5 million for the purpose of making money. The suspects are Kazeem Absdulsalam, 54, and Adamu Hussein, 36.

Previous Wickedness: Carpenter Stangles Wife To Death, Dumps Body In Lagoon
Next Family To Get $9,680 As Compensation For Woman’s Gruesome Death