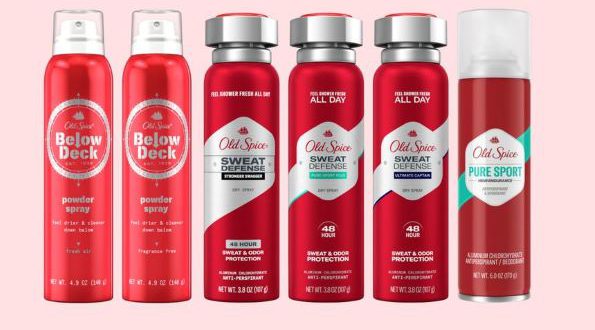 Procter & Gamble Co. is recalling its Old Spice and Secret antiperspirant sprays after it detected benzene, a cancer-causing chemical, in some of the products.

Procter & Gamble Co. is recalling some of its Old Spice and Secret aerosol antiperspirant sprays after benzene, a cancer-causing chemical, was found in some products.

The company said it had notified retailers to stop selling the products and that anyone who owns the sprays should throw them away.

The recall impacts 18 products, including eight Old Spice items and 10 Secret sprays that have an expiration date through September 2023. Customers who bought the products were eligible to apply to get reimbursed for their purchase on the Old Spice or Secret website

The company said that “daily exposure to benzene in the recalled products at the levels detected in our testing would not be expected to cause adverse health consequences.”

Procter & Gamble added that its other products, including body sprays, solid sticks, and gel antiperspirants and deodorant products, were unaffected by the recall and said customers could continue to use those items normally.

The company also noted that it “has not received any reports of adverse events related to this recall and is conducting this recall out of an abundance of caution.”