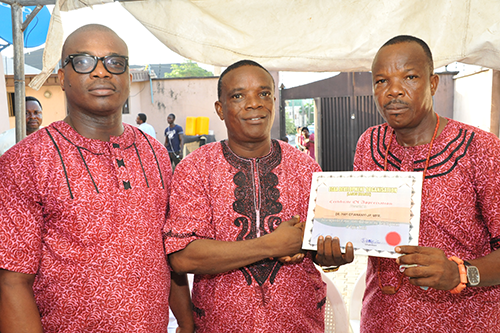 Some prominent indigenes of Egba Community in Uhunmwonde Local government area of Edo State were at the weekend honoured in Lagos for their meritorious contributions to the development of the community.

The awards were bestowed on them by Egba Development Organisation, Lagos branch.

Among the recipients was Dr. Iyayi, Ifiananyi JP, MFR. He was recognised for his untiring contributions to the physical and human development of the community.

According to a statement signed by Charles Igbinidu, Public Relations Officer, Egba Development Association, Lagos Branch, Dr. Iyayi was also recognised for single-handedly sponsoring the building of the first bridge leading to the community and the construction of the link road to the community from Benin – Auchi road.

Charles Igbinidu is a Public Relations practitioner in Lagos, Nigeria
@https://twitter.com/ionigeria
Previous I will run for presidency under PDP in 2019 – Lamido
Next Suspected herdsmen kill 5 in Uzo-Uwani — Police