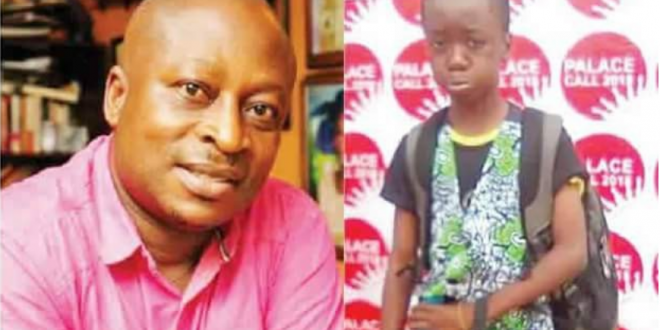 Nigerian Journalist And His 10-year-Old Son Die In A Shopping Complex Fire Out Break In Ikeja, Lagos

A fire that gutted a shopping complex on Awolowo Way, Ikeja, Lagos on Sunday, killed a journalist and his young son.

It was gathered that Akinwunmi Dickson and his son Nelson, 12, were asleep in an office in the complex when the incident happened around 5am.

According to an eyewitness, the 50-year-old, who published a brand magazine, Brand Campaign, and his son were choked to death by the smoke of the fire.

“I was asleep when I heard a noise around 5am. People were shouting that a building was on fire. We quickly called the fire service. When they did not show up on time, people were forced to break into the shop which was on fire. That was around 6am. But the smoke was much and nobody could enter. It was the smoke that killed the journalist and his son because the fire did not gut his office.

“At times, if there was traffic, he usually slept in the office with his child. No one knew he was inside the office because everybody was busy finding a way to put out the fire. Before we knew they were there, it was too late. They had struggled to open the door, but could not see anything because the smoke was much. In fact, people found them dead at the back entrance to his office.”

Another resident and witness, Busayo Adebanjo, said one of the air conditioners of a boutique in the complex caused the fire.

“The fire started inside a boutique. One of the boutique’s air conditioners that had fault caused the fire. The owner of the boutique had traveled; so one of his boys switched on the air conditioner.
“It was that air conditioner that caused the fire and since there was no one inside, it was not easy to break into the office to put out the fire. Immediately the fire started, the state fire service was called, but the officials did not come early. Before they came to put out the fire, it had damaged many goods inside the shop.”

Confirming the incident in a statement, spokesperson for the Lagos State Police Command, CSP Chike Oti, said the corpses had been taken to a morgue.

“On September 9, 2018, around 5.20am, there was a distress call to the police control room that there was a fire at a shopping complex and a residential building on Awolowo way, Ikeja, Lagos.
“One of the shops where the fire started was completely gutted; one Akinwunmi Dickson, 50, and his son, Nelson Dickson, 10, who slept in one of the shops used as an office in the building were choked to death as a result of smoke from the burnt shop.
“Various patrol vehicles provided security. Values of property destroyed have not yet been estimated. The corpses have been taken to IDH mortuary, Yaba, for autopsy. Investigation into the cause of the fire is still ongoing.”

“Our control room were informed around 5.40am and we arrived at the scene of the fire around 5.44am. Ikeja Fire Station responded, while Alausa Fire Station provided the back up a few minutes later. The fire affected four shops on the first floor of a three-story building. A male adult and a teenager were recovered and handed over to State Environmental Health Monitoring Unit.”