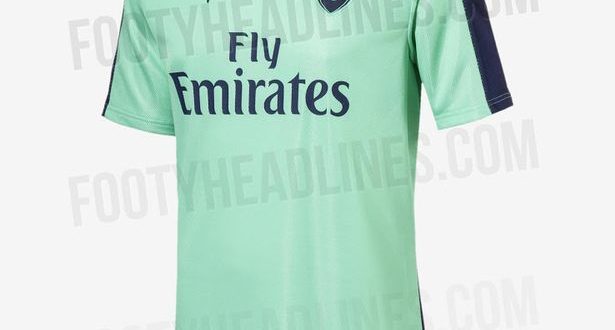 Last week we unveiled to our readers next season’s kit for Manchester United. Since then we have been scouring the internet for a first peek at other shirts we’ll be seeing in the top flight next season.

The title has been won, the Champions League places look done and dusted and even the relegation issue is starting to look clearer, so what have we got left to look forward to in the Premier League?

Well, in short, next season.

After Manchester City’s dominant success in this campaign, their rivals will be gearing up to take their crown in 2018/19.

Jose Mourinho won’t stand for another season in which Manchester United don’t challenge at the top, Liverpool – possibly backed by European success – are getting more and more exciting to watch, Tottenham continue to entertain, Chelsea will be back and Arsenal… well… yeah, but what will all of those clubs look like over the season?

We’ve been scouring the internet for the latest Premier League kit leaks, and these are the ones we’ve found so far.

The ever-reliable Footy Headlines have managed to get hold of the Gunners’ third kit and it is… well… a bit different.

In what is Puma’s final year with the club, a colour that they call “Biscay Green/Peacot” – yeah, us either – will be seen on Arsenal’s travels in 2018/19, with the away kit set to be blue, although mercifully a deeper blue than this season’s hideous number.

The home one will be red and white. Obviously.

The red and white lines on Chelsea’s home kit seem to hark back to a bygone era when Roman Abramovich thought the King’s Road was just a monarch’s driveway, and the yellow away kit follows a popular theme of copying old goalkeeper’s shirts.

The third kit is a bit Man City, but that’s hardly a bad thing.

Predominantly dark red, just like this season’s Liverpool jersey, the 2018-2019 Liverpool home kit features white trim on the collar and shoulders. All logos on the front of the shirt are also white, including the traditional Liverbird logo.

Since adopting the deeper red approach Liverpool’s home kits have been excellent, and this one looks to be another winner. But as for the aways…

It is being suggested that the purple kit is going to be Liverpool’s first choice on their travels, but we wouldn’t be surprised if that is actually the honour bestowed on the white number, which is seen here on Gini Wijnaldum so it’s probably legit.

The champions’ home and third kits are still to be properly leaked online, but we have had the pleasure of this rather garish away number which puts you in the mind of strobe lighting in a dodgy nightclub.

Still, when you play the way they do then you can get away with it.

That home kit is a bit odd isn’t it? It kind of gives you a headache by the time you get to the bottom of it, and call us traditionalists but we’d like to see a bit of white in there.

There has been plenty of second guessing about the away and third ones, with their colours believed to be pink and ‘midnight blue’ respectively.

Eh Aye Eh, it’s time for Tottenham with a couple of decent efforts to take them into the new campaign.

Having seemingly tried to hide the blue on this season’s kit they’ve gone for it at the bottom of this one, while the away number is decent too, bar the sleeves.