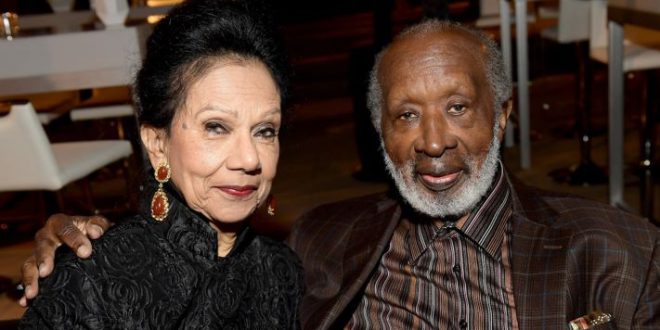 Legendary music executive Clarence Avant’s wife has been shot dead by robbers in a home invasion in an elite, ungated Los Angeles neighborhood.

Beverly Hills police were called to the home in neighboring Trousdale Estates around 2:30 a.m. Wednesday after a 911 caller said someone had been shot and killed, TMZ first reported.

Officers arriving at the scene discovered one victim, Avant’s wife of 54 years, Jacqueline Avant, suffering from a gunshot wound.

She was subsequently transported to a local hospital but died later that morning. 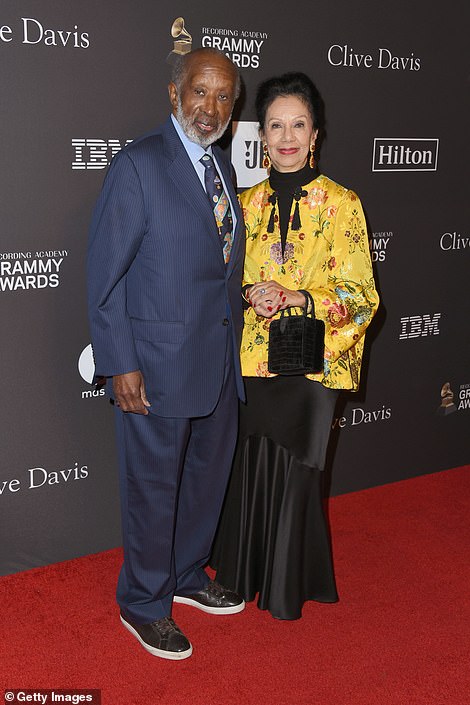 Legendary music executive Clarence Avant’s wife, Jacqueline, was shot dead by robbers in a home invasion Tuesday in an elite Los Angeles neighborhood. Avant, 90, seen here next to his wife in February,

was home during the attack

A security guard was stationed at the house as well, the outlet reported. He was reportedly shot, but did not return fire at the attackers. Sources told TMZ Clarence was not injured.

Beverly Hills Police Chief Mark Stainbrook said Wednesday afternoon that the department is currently conducting an investigation into the incident, which they have determined is a homicide.

No suspects have been identified yet. Police say the assailant or assailants fled the scene before they arrived.

DailyMail.com has reached out to the Beverly Hills Police Department for more information regarding the case.

A family source told TMZ that robbers fired shots as they entered the home and hit Avant’s wife. The home is valued at an estimated $7 million.

Avant was home at the time, but it’s unclear whether he has been injured in the attack, or if the suspects made off with any stolen goods. 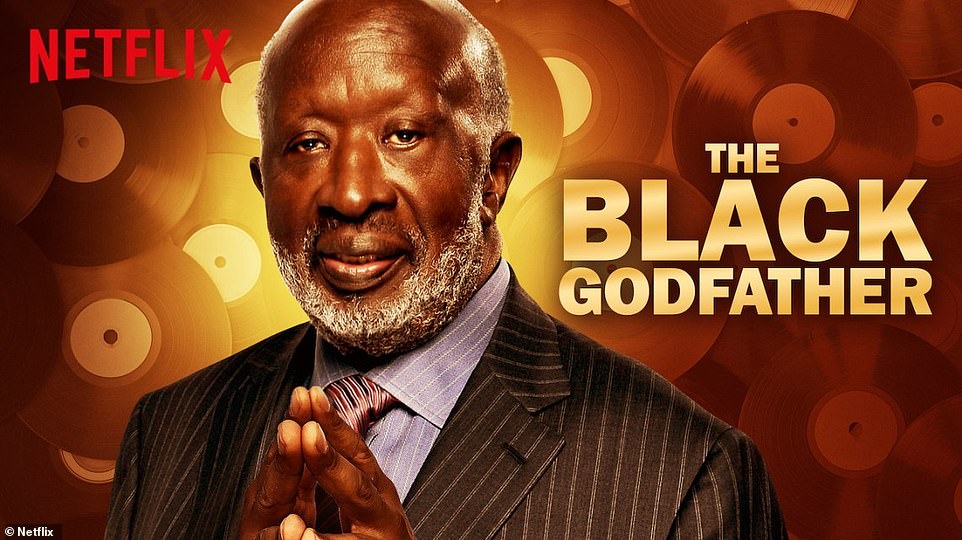 The Motown fixture’s life and legacy were recently chronicled by Sarandos’ streaming service in 2019, in a documentary titled The Black Godfather

Police responded to 90-year-old Clarence’s home after they ‘received a phone call regarding a shooting that had occurred on the 1100 block of Maytor Place,’ Stainbrook said.

‘Police units arrived and discovered a victim with a gunshot wound,’ a statement continues. ‘The suspect(s) were no longer on the scene.’

‘Beverly Hills Fire Department paramedics transported the victim to a local hospital,’ but the chief added that  ‘the victim did not survive.’

An investigation is currently underway. No suspects have been identified at this time

The legendary music executive – who boasts an estimated net worth of $50 million – was inducted into the Rock and Hall of Fame this year, with his wife by his side.

The couple’s daughter, Nicole Avant, 53, is currently married to Netflix CEO Ted Sarandos. Nicole was also ambassador to the Bahamas, appointed by then-president Barack Obama in 2009. Netflix declined to comment on the incident when reached by DailyMail.com Wednesday.

Jacqueline sat on the board of directors of the International Student Center at the University of California, Los Angeles (UCLA), served as president of the Neighbors of Watts – a group that supported the South Central Community Child Care Center, and also served as chairperson of NOW membership and entertainment chairperson of the NOW benefit auction and dinner dance in 1975, according to IMDb.

The Motown fixture’s life and legacy were recently chronicled by Sarandos’ streaming service in 2019, in a documentary titled The Black Godfather.

The Netflix-run production was produced by his daughter Nicole, and detailed how Avant – who boasts a reported net worth of $50 million – oversaw impressive deals for black artists throughout his illustrious career, which spanned decades, through narrations from Barack Obama, Snoop Dogg, Bill Clinton and more.

The Rock & Roll Hall of Fame describes Avant as ‘cool, savvy, confident, and fearless – someone who makes the impossible possible. He’s served a variety of roles during his illustrious career, including manager, label owner, concert organizer, event producer, political fundraiser, and mentor.’

‘Avant’s career began in the 1950s when he served as the manager for Little Willie John and jazz organist Jimmy Smith. In late 1969, he launched Sussex Records, a label that soon achieved a Top Ten hit with Dennis Coffey’s “Scorpio.” The most notable artist on Sussex was Bill Withers, who released his first three records for the label, featuring the hits ‘Ain’t No Sunshine,’ ‘Lean on Me,’ and ‘Use Me.’ In 1971, Avant launched Avant Garde Broadcasting, one of the first Black-owned radio stations in the country.’

He is also a producer and actor known for Deliver Us from Evil in 1975, The Color Purple in 1985 and Jason’s Lyric in 1994, according to his IMDb profile.

He was awarded a star on the Hollywood Walk of Fame in 2016.

The apparent attack on Avant’s home – which is valued at around $7 million and is situated around a string of other multimillion dollar homes – comes as Los Angeles and California have faced a slew of high-end robberies and ‘smash-and-grabs.’

On November 22, around two dozen robbers smashed their way into an LA Nordstrom, making off with $5,000 worth of merchandise.

A CVS pharmacy in the city was struck just an hour later, where looters stole $8,000 from a cash register.

Law enforcement say that mercenary thieves are being recruited for up to $1,000 to steal the expensive goods which are then shipped across state lines and sold on the internet. The sophisticated method, they say makes it harder for cops to track the criminals.

Two days later, police in Palo Alto announced that two women had been arrested in connection with a Sunday night attempt to steal items from the RealReal clothing boutique downtown.

At the time, cops detailed how 30 to 40 people arrived in some 20 cars and tried to break down the glass front door but it held. A security guard then reported the effort via a 911 call, which spurred the crowd to flee as police started to arrive.

The suspects were subsequently stopped in a car near the scene, where police said they found at least $15,000 in clothes from a second RealReal location that was burglarized in Larkspur earlier that night. 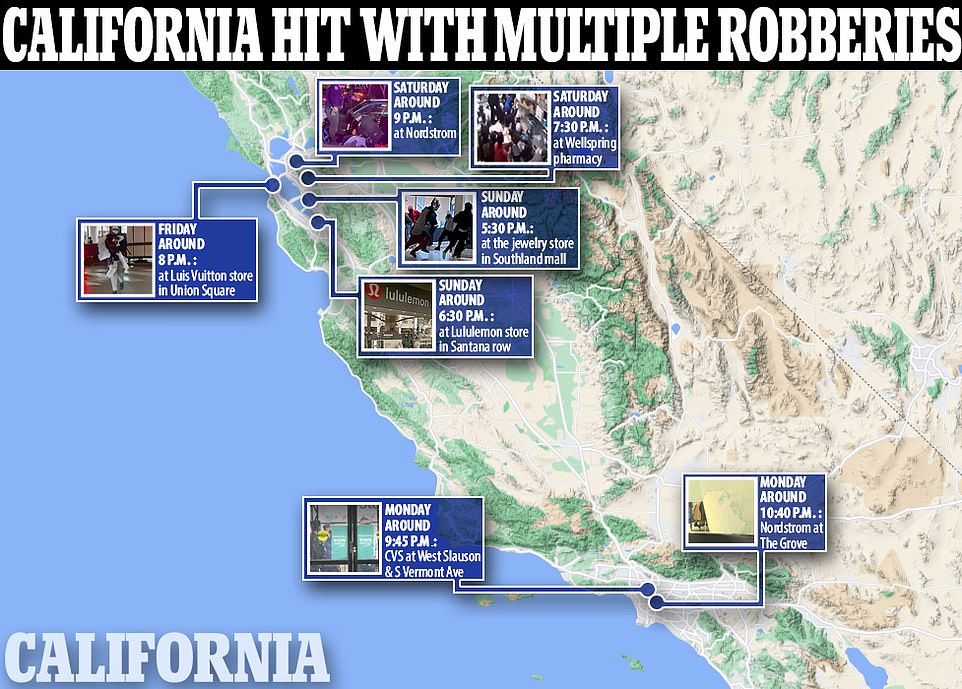 Nine people were initially charged in the string of attacks on San Francisco stores such Louis Vuitton, Burberry and Bloomingdale’s in the city’s downtown area and in Union Square – a posh shopping district popular with tourists that was teeming with holiday shoppers.

Ben Dugan, president of the Coalition of Law Enforcement and Retail, said: ‘We’re not talking about someone who needs money or needs food. These are people who go out and do this is for high profit, and for the thrill.’

Aside from the organized crime rings, the growing problem has been attributed to police officers’ apparent reluctance to pursue such criminals in the current political climate, prosecutors’ failure to prioritize larceny and theft, and the decriminalization of low-level offenses in some jurisdictions.

Lorenzo Boyd, a professor of criminal justice & community policing at the University of New Haven, and Martin Reynolds, co-executive director of the Robert C. Maynard Institute of Journalism Education, urged news outlets to refer to the crimes as ‘organized smash-and-grabs.’

A day earlier, California Gov Gavin Newsom vowed to crack down on the recent robberies, despite a controversial 2014 law – Proposition 47 – that barred prosecutors from charging suspected shoplifters accused of stealing less than $950 worth of merchandise with felonies.

‘For the low-level criminal, the benefit far outweighs the risk, since the threshold for a misdemeanor offense is $950, meaning that a person can steal up to that amount and only be charged with a misdemeanor,’ Lynda Buel, president of Ohio-based security consulting firm SRMC, told CNN.

‘People see the ability to commit these ‘smash-and-grab incidents’ knowing that there is little consequence, especially if the thefts are kept below the threshold of a felony offense,’ Buel added. ‘It’s easy, it’s fast, and the payback is good.’

Over the weekend, the San Francisco Bay Area saw a string of audacious ‘smash-and-grab’ robberies, including an incident involving a gaggle of hammer-wielding masked bandits who ransacked jewelry, sunglasses and clothing stores at the Southland Mall in the San Jose suburb of Hayward.

Dramatic footage released on Monday showed a group of about 40 to 50 robbers smashing glass display cases at Sam’s Jewelers at the mall at around 5.30pm on Sunday. Staffers are seen screaming in terror as the heist unfolded.

The group that targeted the Lululemon store included two women and two men, including one who had a ‘visible gun in his waistband,’ he added. 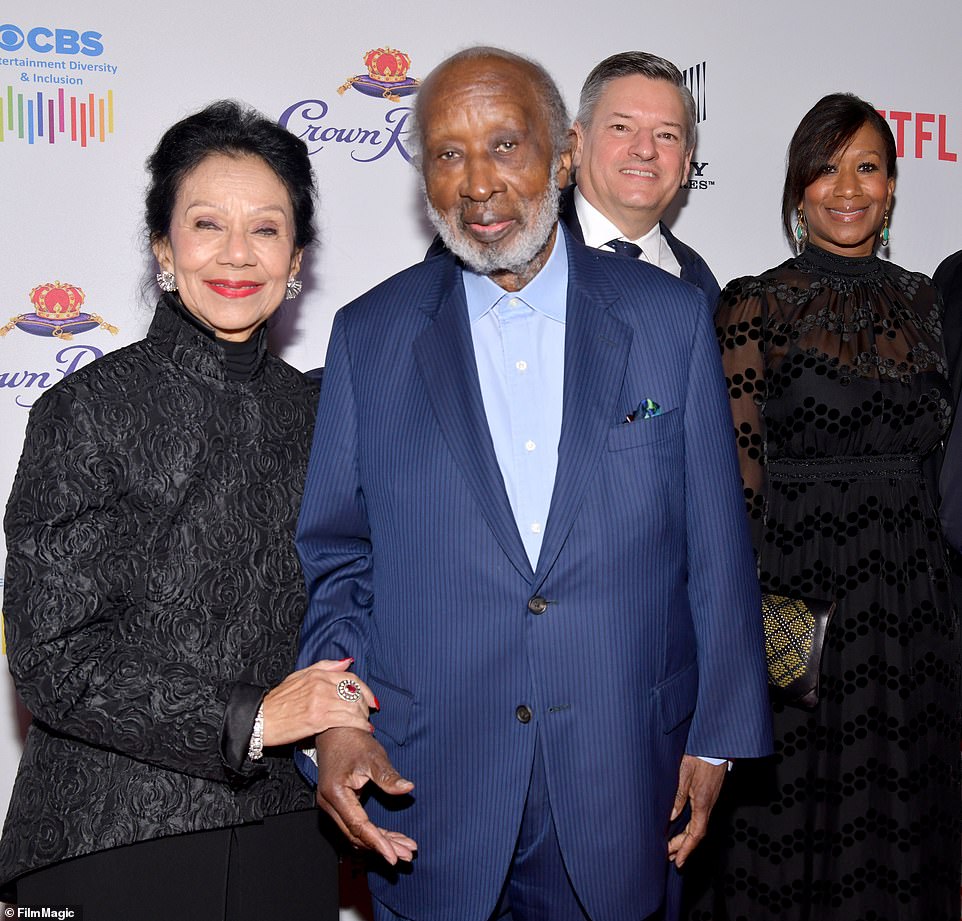 Jacqueline (left) was rushed to a hospital after the attack but succumbed to her injuries shortly after. She leaves behind a 53-year-old daughter, Nicole (second from left), and a son (not pictured). Nicole, a former United States Ambassador to the Bahamas, is currently married to Netflix CEO Ted Sarandos (third from left)

On Saturday, police said as many as 80 suspects, some wearing ski masks and carrying crowbars, targeted a Nordstrom in the San Francisco suburb of Walnut Creek, assaulting employees and stealing merchandise before fleeing in waiting cars, police and witnesses said.

Two employees were assaulted and one was hit with pepper spray during what police called a ‘clearly a planned event.’ Walnut Creek police said they arrested two suspects and recovered a gun.

A day prior, roving bands of thieves brandishing hammers and crowbars hit a string of high-end retailers, including Louis Vuitton, Burberry and Bloomingdales, as well as a Walgreens pharmacy and several marijuana dispensaries, in the vicinity of Union Square in San Francisco, a high-end area popular with tourist that was crowded with holiday shoppers.

Videos of the chaotic scene posted on social media by witnesses showed police officers dragging one suspect from a waiting car and people running with merchandise in their arms or dragging suitcases.

The ‘smash-and-grab’ operations are usually organized by local people who recruit their crews and send them to steal specific merchandise requested by criminal organizations throughout the country, Dugan said.

‘Crew bosses organize them, they’ll give him the crowbars, and in some cases even rent them cars, or provide them with escape routes or a list of products to actually go out and steal. It looks very chaotic but it’s actually very well organized,’ Dugan said.

Illinois Attorney General Kwame Raoul said in September that large-scale store thefts orchestrated by organized crime rings are costing retailers across the US an estimated $45billion in annual losses.

Raoul has formed the Organized Retail Crime Task Force comprised of public and private entities to tackle the problem head on.

‘These brazen, violent crimes are committed by sophisticated criminal organizations that are involved in drug trafficking, human trafficking and other serious crimes,’ Raoul said.

‘Even during the looting we saw last year, we came to understand that some of these criminal acts were not merely opportunistic, but organized in advance,’ he said.

‘The Organized Retail Crime Task Force will allow investigators and prosecutors in my office to better collaborate with our law enforcement partners and ensure cooperation between law enforcement, as well as retailers and online marketplaces, to protect communities, consumers and combat the rise in retail crime.’

Gov. Gavin Newsom said his office met with retailers over the weekend who asked for more police patrols.

‘You will see substantially more starting today, in and around areas that are highly trafficked and coming into the holiday season Black Friday in shopping malls,’ he told reporters Monday at an event in San Francisco.

Charles Igbinidu is a Public Relations practitioner in Lagos, Nigeria
@https://twitter.com/ionigeria
Previous First US omicron case detected in California
Next How Kano Officials Locked Up Lawyer Who Inspired Victory Of Shekarau’s APC Faction