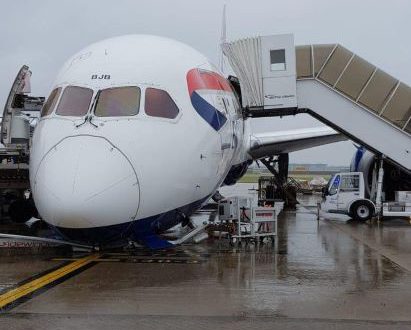 It happened while the aircraft was parked on the tarmac at the west London airport earlier.

The airline said it was a freight aircraft and there were no passengers on board.

Fire engines, ambulances, and police rushed to the airport with the extent of the damage to the plane not yet known.

The Boeing 787’s nose gear appeared to have collapsed, with pictures showing the airstairs attached to the BA jet.

Images appear to show that the front landing gear underneath the pilots’ cabin collapsed, leaving the plane at an angle.

A British Airways spokesman said: “A freighter aircraft has been damaged while stationary on stand. As a freighter only aircraft there were no passengers on board.

“Safety is always our highest priority and we are investigating the matter.”

The aircraft was carrying out flight #BA881 from Moscow on June 16, when the incident took place.

“Extent of the damage is currently unknown. Further details will be reported once available.”

It is thought that the aircraft was preparing for a cargo flight to Frankfurt when the incident happened.

British Airways have insisted that there will be no knock on effect to passengers because of the collapse.

It comes after the airline has been struggling over the past year due to the coronavirus pandemic, but more than 100 countries could be cleared for quarantine-free summer breaks for Brits who have had both Covid jab doses.

Ministers are considering plans to allow the fully-vaccinated to flash their NHS App at border controls to avoid the ten-day self-isolation.

This could open up sunny favourites currently on the amber list, including Spain, France and Greece.

The strategy is still in early discussions but The Sun understands that, if it is approved, Boris Johnson could sign off the plans before the season is done.

Charles Igbinidu is a Public Relations practitioner in Lagos, Nigeria
@https://twitter.com/ionigeria
Previous Israel to give Palestinians 1 million soon-to-expire Covid-19 vaccine doses in exchange deal
Next Football fans to be BANNED from singing and cheering during England vs Scotland Euros game due to Covid rules