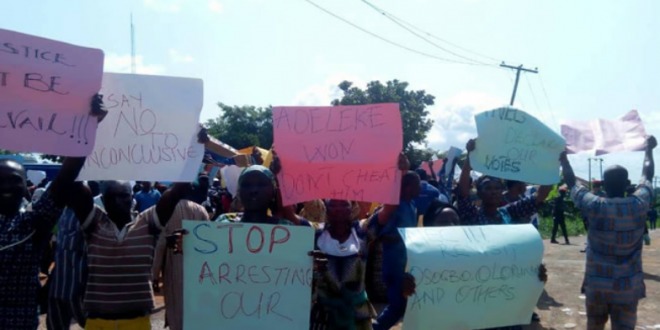 Hundreds of the supporters of the Peoples Democratic Party on Monday stormed the headquarters of the Independent National Electoral Commission to protest against the state rerun governorship election ordered by the commission.

The protesters who were armed with placards with various inscriptions such as “No To rerun, “, INEC don’t conspire with APC”; “The people spoke on Saturday, announce the results ” among others.

The protesters berated the INEC for not declaring Senator Ademola Adeleke the winner of the poll having scored the highest number of votes in the poll.

They said the people of the state had spoken that majority of the voters wanted Adeleke as the state governor and that should be respected.

Previous Photos: Nigerian Man Crowned King In The US
Next ”I Have No Regrets Kidnapping APC Chairman’s Son”, Says Suspect