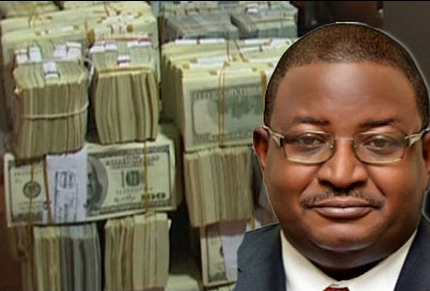 Witness Tells Court How He Discovered $9,772,500 In A Fireproof Safe At Ex-NNPC boss,Apartment

The trial of a former Group Managing Director GMD, Nigerian National Petroleum Corporation, NNPC, Andrew Yakubu continued on January 16, 2018 before Justice A. R. Mohamed of the Federal High Court Abuja with the EFCC’s third witness telling the court how foreign currencies believed to be proceeds of crime were recovered in a fireproof safe in an apartment belonging to the former NNPC boss in Kaduna.

The witness, Ahmed Yahaya, an operative of the EFCC Kano Zonal Office gave details of how he came across the $9,772,500 and 74,000 pounds sterling in the said apartment.
He said,

On 3rd February, 2017 my Head of Operations called me and informed me that a team of operatives attached to Intelligence Special Operations Section (ISOS) are coming from Kaduna on special assignment and they are coming back with a fireproof cabinet safe and that I should make arrangements for collecting the exhibits recovered by the team.
“At about 1830HRS, the team arrived with the recovered exhibits and the caretaker of the said exhibits by name, Bitrus Yakubu.
“The recovered fireproof safe made by ‘Gubabi’ which was opened by experts contained monies. The monies were counted in the presence of the investigating team, including the Zonal Head of Operations, Deputy Zonal Head of Operations and the said Bitrus Yakubu.
“At the end of the counting, a total sum of 97,725 pieces of 100 notes of United Stated Dollars was discovered valued at $9,772,500m; 6 pieces of 50 notes of U.S Dollars valued at $300 and 1,480 pieces of 50 notes of sterling pounds valued at 74,000 sterling pounds were found in the safe”.

Yahaya further told the court that the monies were duly packaged and registered in the court exhibit register. He added that, on February 13, 2017, he received a court order by the Legal Department and investigating team informing him of the interim forfeiture of the recovered amount.

He also told the court that after all relevant investigations, the whole monies were carried to CBN Kano Branch on March 17, 2017 for safe keeping and the monies were also counted by CBN experts and the bank issued certificate of delivery which was duly signed by both staff of EFCC and CBN.

The safe, which is already an exhibit; the interim order made by the Federal High Court, Kano; the exhibit registration form and the certificate of delivery were identified by the witness and admitted in evidence.

Under cross-examination by Yakubu’s counsel, Ahmed Raji, SAN, Yahaya told the court that he did not know if any insurance policy was taken by EFCC against the money apart from the certificate of delivery given to EFCC which serves as gate way to the money.
When asked how safe the money was in CBN, he said, “as far as I am concerned, the monies are safe in the CBN, although I don’t know the day-to-day running of the bank.
Yakubu, is facing trial on a six-count charge, bordering on money laundering and false declaration of assets.

It would be recalled that, on the 3rd day of February, 2017, operatives of the EFCC had stormed a building belonging to the former NNPC boss and recovered a staggering sum of $9,772,000 (Nine Million, Seven Hundred and Seventy Two Thousand United States Dollars) and £74,000 (Seventy Four Thousand Pound Sterling) stashed in a huge fire proof safe.
Yakubu, who admitted to be the owner of the monies, claimed it was gifts given to him by friends and well wishers and also savings accumulated over a period of years.

The case has been adjourned to February 28 for further trial.