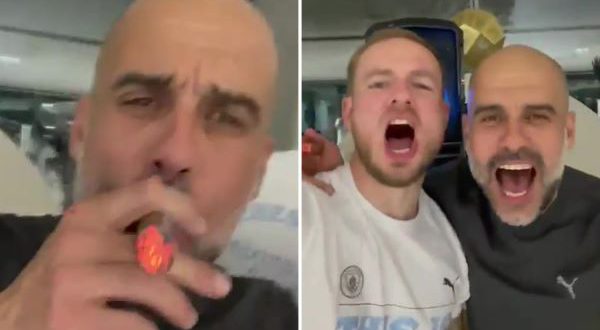 The Spanish manager was seen having a cigar while belting out Oasis classic Don’t look Back In Anger with colleagues as his team took a break from their Champions League final preparations.

The 50-year-old appears to have been partying at a club-organised event, with others in the video wearing T-shirts celebrating the team’s title win.

Crates of lager and dozens of people – believed to be members of staff – can be seen in the background.

City’s next Premier League game is against Brighton on Tuesday night and they are due to lift the trophy in front of 10,000 fans after playing Everton on Sunday.

Guardiola appeared to know all the words to ‘Don’t Look Back In Anger’ – proving he’s become a true Mancunian since arriving at the club five years ago.

He also mentioned Noel Gallagher’s name several times as he sang, appearing to dedicate his efforts to the avid City fan.

The only trophy missing from Guardiola’s Manchester collection is the Champions League – and his team will have the chance to win it when they face Chelsea on May 29. 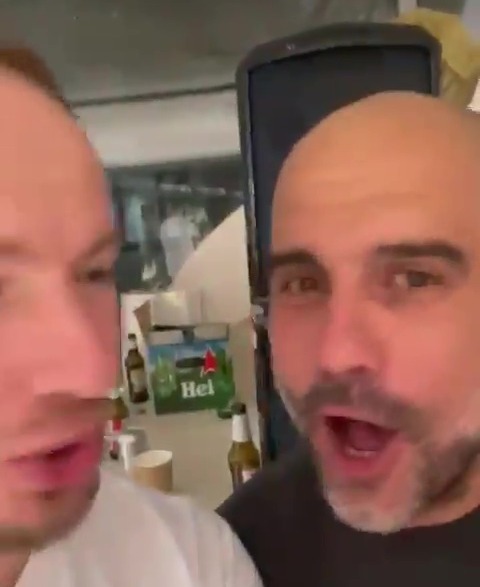 Thomas Tuchel’s side have nothing to celebrate at the moment following their 1-0 defeat to Leicester City in the FA Cup final.

The Blues are in a battle to finish in the top four and will be desperate to achieve that and Champions League glory, starting with tonight’s game against Cup conquerors Leicester.

Chelsea fans will be hoping City’s title celebrations will spur them on to become champions of Europe for a second time when the two sides meet in Porto.
Share 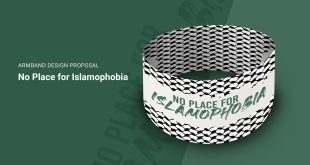