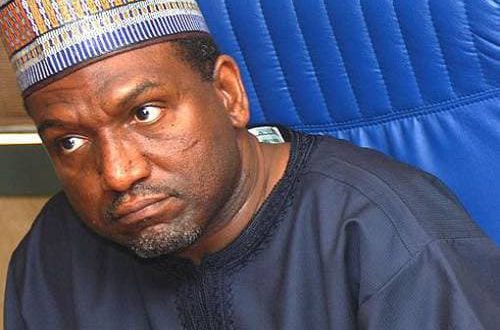 The body of Sani Dangote, a younger brother to Africa’s richest man, Alhaji Aliko Dangote, is billed to arrive in Nigeria, on Tuesday, from the United States (US).

Sani, the Group Vice President of the Dangote Group, died on Sunday after a brief illness in the US.

A source close to the family said, “Sani Dangote had been battling colon cancer and he travelled to the US in search of a cure, but as God willed, he died at the age of 61.

“Indeed, the Dangote family really feel the death, but we have accepted it with total submission to the will of Almighty Allah.”

Sani is survived by his aged mother, wife, eight children, and brothers and sisters.

Since the news of Sani’s death filtered in, sympathisers have been thronging the Dangote family residence at Koki Quarters in Kano City.

According to a  Daily Trust report the funeral prayer may be observed at the residence of Aliko Dangote in Nasarawa GRA.

When our reporters visited the Koki Quarters’ family home of the deceased, it was observed that the daily feeding of hundreds of indigents went ahead as usual.

“We have gathered here as we use to, and if not for one of Hajiya Mariya’s maids we wouldn’t have known that Hajiya has lost one of her sons.”

“We have held a special prayer session for her late son and we will keep praying for his soul to rest in peace,” said an aged woman, Malama Hinde Bako.

Before his death, Sani Dangote was the Group Vice President of Dangote Industries Limited and Deputy Chairman of the African Gum Arabic Producers Association (AGAPA) and a two-time President of the Lagos Polo Club.

He was also a member of several chambers of commerce, a fellow of the Chartered Institute of Shipping of Nigeria (CISN) and President of the Fertiliser Producers and Suppliers Association (FERSAN), as well as the owner of Dansa Foods Limited, Dansa Energy, Sagas Energy Limited, Bulk Pack Services Limited, Dansa Agro Allied Limited and Dangote Farms Limited.

President Muhammadu Buhari has commiserated with Alhaji Aliko Dangote over the death of his younger brother.

In a statement Monday by his spokesman, Femi Adesina, President Buhari joined the family in mourning the industrious son who over the years played a key role in the success of the family business, dedicating his time to ensure fairness and optimum results in all endeavours.

He said the deceased was reputed for his gentility, loyalty and generosity.

The president, who urged approximation of his wonderful deeds on earth, prayed that the Almighty God would grant him eternal rest.

Similarly, former Vice President Atiku Abubakar said, “It is with a heavy heart that I mourn the passing away of Sani Dangote, VP of Dangote Group and founder of Dansa Agro-allied Limited. He was an astute businessman engaged in diverse sectors of the economy.”

Senate President, Ahmad Lawan, described the death of Sani Dangote as a great loss to Nigeria and Africa given the passion of the Dangote Group for the development of the country and the continent.

“Alhaji Sani Dangote was a great entrepreneur who brought his business acumen to impact positively on the Nigerian economy and Africa in general, particularly in the areas of manufacturing, agriculture and oil services.”

“I share the grief of the entire Dangote family on the sad incident and pray that they find comfort and strength in their faith in Almighty Allah,” Lawan was quoted in a statement by his media aide, Ola Awoniyi.

The Speaker, House of Representatives, Femi Gbajabiamila, said the late Sani Dangote was a perfect gentleman who gave his best to the growth and development of the Dangote Group.

In a statement by his media aide, Lanre Lasisi, the speaker said Sani’s contributions to the development of the Dangote Group and the private sector in Nigeria would remain indelible.

A former Senate President, Bukola Saraki, tweeted: “My family and I are extremely sad to learn about the death of Alhaji Sani Dangote, the Group Vice President of the Dangote Group and younger brother to our dear friend, Alhaji Aliko Dangote.”

Kano State Governor, Abdullahi Umar Ganduje, expressed shock over the death of Sani Dangote who he described as an illustrious son of the state.

“It is, therefore, on behalf of the government and good people of Kano State that I, the Governor of Kano State, I’m sending our heartfelt condolence to the immediate family of Alhaji Sani Dangote, to his brother, Alhaji Aliko Dangote, over his death,” the governor was quoted in a statement by his media aide, Abba Anwar.

“May Allah forgive all his shortcomings and reward his good deeds with Jannatul Firdaus, amen,” Ganduje prayed.