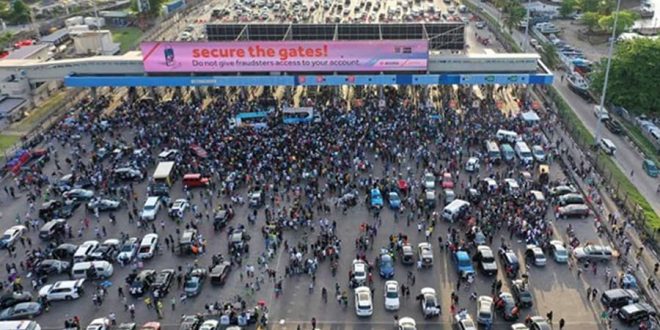 Spread the love
The Lagos State Judicial Panel of Inquiry on Restitution for Victims of SARS Related Abuses and other matters, has released the detail of some casualties of Lekki Toll Gate shooting of October 20, 2020 during the ENDSARS protest.#EndSARS was a decentralised social movement and series of mass protests against police brutality in Nigeria. The slogan called for the disbanding of the Special Anti-Robbery Squad, a notorious unit of the Nigerian Police with a long record of abuses

The Justice Doris Okuwobi-led panel, which submitted its 309-page report to Lagos state governor, Babajide Sanwo-Olu on Monday, listed 48 casualties from the Lekki shooting, noted that 11 were confirmed dead, four missing and presumed dead, while others suffered gunshot injuries, severe assault among others.

The Nigerian government had insisted no one was killed in the attack on protesters at the Lekki Tollgate.

The panel said the shooting of the protesters can be equated to a ‘massacre’ in context.

“The atrocious maiming and killing of unarmed, helpless and unresisting protesters, while sitting on the floor and waving their Nigerian flags, while singing the National Anthem can be equated to a ‘massacre’ in context,” the panel said in its findings.

LIST OF SOME CASUALTIES OF LEKKI TOLL GATE INCIDENT OF 20TH OCTOBER, 2020