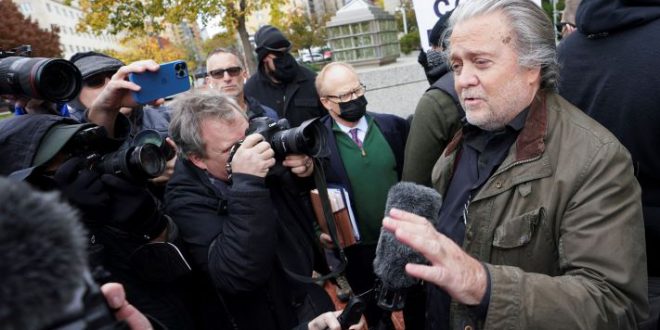 Defiant Bannon warns of ‘misdemeanor from hell’ for Biden

Ex-Trump White House adviser Steve Bannon threatened to make the charges against him “the misdemeanor from hell” for the Biden administration as he exited his first court appearance after being indicted for defying a Congressional subpoena.

The Department of Justice on Friday scored an indictment against Bannon after filing two charges of criminal contempt of Congress, saying the former Trump staffer failed to “comply in any way” for a request for documents and a deposition from the House committee investigating the Jan. 6 attack on the Capitol.

“I’m telling you right now, this is going to be the misdemeanor from hell for Merrick Garland, Nancy Pelosi and Joe Biden. … We’re going on the offense,” Bannon, referencing the attorney general who brought the charges against him and the House Speaker, told reporters as he was leaving the courthouse.

Bannon surrendered himself to federal authorities Monday and was released without bond, required to turn in his passport and submit to weekly check-ins with the court.

Bannon will be arraigned at a Thursday hearing, where he is expected to plead not guilty.

Though a misdemeanor, if convicted Bannon faces serious penalties. Each charge carries a minimum of 30 days and a maximum of one year in jail, as well as a fine of $100 to $100,000, meaning Bannon could be fined up to $200,000 and spend as much as two years in jail.

The Jan. 6 committee was seeking to speak with Bannon both due to his proximity to Trump and his efforts on planning leading up to the Capitol riot, including time spent in the “war room” at the Willard Hotel where the Trump team was organizing.

The House voted in October to refer Bannon to the Department of Justice for criminal prosecution, with Homeland Security Chairman Bennie Thompson (D-Miss.) speculating Bannon would be willing to be a “martyr” for former President Trump’s cause.

“Mr. Bannon will comply with our investigation or he will face the consequences. Maybe he’s willing to be a martyr to the disgraceful cause of whitewashing what happened on January 6th — of demonstrating his complete loyalty to the former president.”

Bannon’s comments to reporters Monday suggest he may see himself in such a light.

“Not just Trump people and not just conservatives — every progressive, every liberal in this country that likes freedom of speech and liberty should be fighting for this case. That’s why I’m here today: for everybody. I’m never going to back down,” he said.

Bannon bucked the committee after a lawyer for Trump directed him and other aides not to cooperate as it would violate his executive privilege.

The committee has argued Trump can make no such claim as the power to block documents and testimony before congressional committees can only be exercised by a sitting president.

Bannon, who worked for Trump for less than a year, was not a White House employee during the time period the committee seeks information on, something the committee says makes his executive privilege claim even more dubious.

But Bannon’s lawyer, former Trump impeachment attorney David Shoen, said Monday, “When the privilege has been invoked by the purported holder of privilege, he has no choice but to withhold the document. You can’t put the genie back in the bottle.”

“He didn’t refuse to comply. He made quite clear that if a court ordered him to comply, he would do that. But he had an obligation to honor the privilege.”

Shoen will also seek to argue that executive privilege can cover former employees even after they leave the White House.

“Office of Legal Counsel opinions make clear that it applies to discussions with former government officials. And that makes sense — it makes sense because we often see former officials kept in the loop that the president needs to consult with,” he said, referring to an office within DOJ that advises the attorney general on legal matters.

“That’s what executive privilege exists for. So that people can speak freely with the president, talk about strategy matters and talk about national security.”

As Trump seeks to battle the National Archives to prevent the release of his documents to the committee — a process greenlit by Biden — a judge initially ruled in favor of the committee, suggesting former presidents have little power to claim privilege.

“Presidents are not kings and plaintiff is not president,” D.C. District Court Judge Tanya Chutkan last week in a decision appealed by the Trump team.