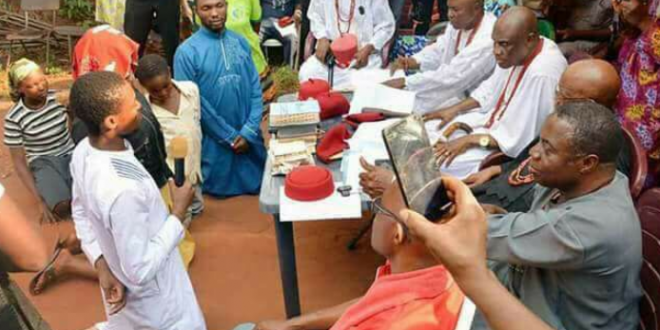 A teacher, Chiadiakobi Ezeibekwe who married his 17-year-old sister, Chibuzor has asked for forgiveness after the entire family of Lewis Ezeibekwe, on Saturday, underwent a spiritual cleansing conducted by the Parish Priest of St. Joseph’s Catholic Church, Ekwulobia, Rev. Fr. Ignatius Onwuatuegwu.
The Ezeibekwes from Agba community in Ekwulobia, Aguata LGA of Anambra State also cancelled the controversial marriage between two siblings in the area.

According to report, the priest, who read from 1 Peter 24:2 of the Bible, warned against incest. He said, “This issue does not concern only the family of Lewis, it concerns the entire Ekwulobia. We are in a world that has disintegrated. This cleansing is important for all of us and the entire country.

We are here to make reparation for the sin that is already rampant in our society. I am particularly touched by this boy, Chiadi. When I came to Ekwulobia, I met him as a boy yearning for the things of God. .

He was the leader of the block rosary group but here we are today. When I heard the story, I was taken aback. Only God knows what happened.” Before the church service commenced, eight members of the Ezeibekwe family knelt down before the traditional ruler, traditional prime minister and elders of the community and apologised to the entire Agba Ekwulobia community.
Chiadikaobi also asked for forgiveness from the community for marrying his sister. He said, “What we did was wrong and an abomination to our community. I feel pained in my heart. .

I did not do it because I was hungry for a woman or attracted to my sister. I apologise to everyone. I am very sorry for bringing all of you out here under the sun. Please forgive us.”

Previous Help!!! They Want To Tarnish My Image – Goodluck Jonathan Cries Out
Next CAN Chairman Crushed To Death By Trailer In Taraba