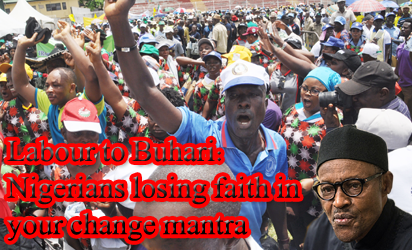 Labour to Buhari : Nigerians losing faith in your change mantra


ORGANISED Labour at Sunday’s May Day celebration, told President Muhammadu Buhari that workers and ordinary Nigerians were beginning to lose faith in the change mantra of the All Progressives Congress, APC-led Federal Government.

The President, however, assured workers and Nigerians generally that his government was determined to tackle, headlong, all socio-economic ills troubling the nation. He said the government would evolve solutions to emerging threats to the well being of the people and the realization of sustainable development as well as growth anchored on equity and social justice.

But the Nigeria Labour Congress, NLC, and the Trade Union Congress of Nigeria, TUC, were unanimous in condemning increasing poverty, unemployment, insecurity, erratic power supply, fuel scarcity, and called on government at all levels to urgently address the mounting hardship and frustration in the country.

Though both the Ayuba Wabba and Joe Ajaero factions of the NLC held their May Day rallies in Abuja and Lagos respectively, they were united on issues affecting workers and other Nigerians, and called for improved economy and well-being of the people.

Addressing the gathering at Eagle Square in Abuja, factional leader of the NLC, Wabba, urged the President to provide people-based actions and programmes and not elitist programmes. He said the government should come up with discernible strategies and directions that would tell Nigerians where his government was headed  economically.

He also implored the federal government to stop further attempts at privatisation, especially of railways, return local refineries to full capacity and invest in new refineries and in, the short-run, sort out the supply bottle-neck that had made product availability difficult in Nigeria. He urged the government  to discourage all companies destroying collective bargaining platforms in order to encourage decent workplaces and enhanced terms and conditions of service for Nigerian workers.

Wabba appealed to President Buhari to initiate a deliberate policy to build domestic industrial capacity, not just by stimulating private sector investments, but also by investing in medium and large scale industries in critical sectors of the economy.

He equally urged him to set up a special task force to stop all the violence and bloodletting spreading like wild fire all over the country”.

On insecurity, he said:  “At the beginning of the year, we had cause to assert that on the security front, our armed forces within the year, redeemed their reputation as a resilient fighting force and fought the Boko Haram insurgents, inflicting heavy defeats on them in the North Eastern part of the country.

“As workers, who have been direct victims of the violence in the North East, we want to use this May Day to restate our call for Mr. President to combine the military success with a marshal plan for the reconstruction of the devastated infrastructure of the geo-political zone.

“The ruling APC government in its manifesto, promised to create three million jobs annually. We have waited one year for the government to bring out its blueprints on how it intends to go about achieving this. Congress will seek audience with Mr. President to get more information on this important matter.”

Similarly, Ajaero, while addressing workers, after a long procession from NLC office at Yaba through the Funsho Williams Way, at Iponri, before returning to the front of the National Stadium, Lagos, said:  “It is a shame that we have continued to import petroleum products. It is also a shame that we have also privatised it so that the products have become inaccessible to majority of the citizens, causing serious distortions to our economic processes.

“Fuel scarcity has persisted far longer than ever, foisting on our people the most horrendous of sufferings ever meted out to them by any ruling elite in our nation’s history.

“This has driven the prices of staples far above the reach of the ordinary people.  Bread has gone up by 25%; Garri from N300 per paint bucket to N500; rice from N8,000 to N15,000; Milk and Chocolate beverages by about 50% while toiletries and other home products have all skyrocketed beyond the reach of workers and the masses.

“As a nation, we cannot be seriously thinking of economic development, when we allow our domestic manufacturing capacity to continue to decline. We cannot move forward as a nation, when instead of producing more products internally, we allow the existing ones to fold up.

“We cannot make progress when our tastes are heavily foreign. We cannot be talking of economic development when we continue to import petroleum products,  allowing our local refineries to lie comatose. Has anybody imagined what would happen to the foreign exchange market and the pressure on the Naira if we stop this national insanity of importing petroleum products and refine our products locally?”

In the same vein, the President of TUC, Mr. Bobboi Kaigama, while corroborating Wabba and Ajaero in a speech at the Eagle Square, said the country was bleeding, adding that there was no pretence about that fact.

He said:  “He who feels it, knows it.  The poor masses of the country feel it in all spheres, and only very close monitoring of the economy, commitment and sincerity of purpose constitute the way out.

“We must start generating significant increase in the income and development of the country. In as much as the present administration appears intent on fashioning out effective ways of checking wastage of our resources, they must decisively check unrepentant saboteurs who have continued to have a field day.

“The truth is that Nigerians are currently in pains, and the pains can only be soothed when the leadership abhors unfriendly policies like those advocated by the BrettonWoods institutions, addresses naira depreciation issues, inflation, corruption, power outages, breach of collective agreements by employers, Boko Haram insurgency and ethno-religious violence, the unwarranted killings in Agatu by Fulani herdsmen, the kidnappings, collapse of socio-economic infrastructure, including our existing refineries, roads, schools, and the drought of petroleum products, etc.

“We certainly do not need any soothsayer to tell us that the current slide in the global prices of oil would have less adverse effects on our economy, if we refine our oil within our borders.”

The President, in his speech read by Labour Minister, Dr. Chris Ngige, said his government was not unmindful of what Nigerians were presently going through but assured that the federal government was determined to remedy the situation.

He said: “I make no excuses as this government of the APC  is determined to tackle, headlong, all socio– economic ills that have troubled our nation and we shall evolve solutions to emerging threats to our well being and the realization of sustainable development as well as growth anchored on equity and social justice.

‘’Development must be sustainable for it to benefit society in general. It is, therefore, the responsibility of those in the citadels of power to align themselves with the working class who make development possible by generating and sustaining the momentum of positive change.

“That is why the present administration has sought and will continue to seek the hands of Labour so that together we can attain the enviable heights of progress in our beloved country.

“It is for this very reason that I aspired to become President which the Nigerian people have now made a reality. This administration shall effect positive change in the lives of average Nigerians, to ensure that the downtrodden are elevated and most importantly to fight the intense pain of corruption which has enriched the very few to the detriment of the majority of Nigerians who groan under the overwhelming weight of poverty and all the superstructural and infrastructural maladies resulting from corruption.

“In this fight against corruption, I need you all to be very willing partners. Fighting corruption in the public service in particular, requires the workers to play major roles by cooperating with the government.

“I have listened to the speeches made by both the Presidents of the TUC and NLC. By the speeches, you have without any equivocation affirmed   your faith in the greatness of Nigeria as a nation.

“The challenges facing Nigeria have been highlighted and I assure you that they shall be accorded due consideration. It is worthy to note that solution to some of those issues and requests are already being considered and would be made public in the near future.

“The times may be tough, but we Nigerians are by nature resilient and strong and it is that nature that propels us to overcome adversities and still thrive as a nation.

“Let us use this National May Day to celebrate the workers and Nigeria as a nation. There will always be challenges in the life of a man and what defines greatness is the way and manner such challenges are tackled and overcome.

“I assure you, great Nigerian workers that this administration is able and willing to constructively handle the challenges.  In so doing, I request your cooperation and understanding, as partners in progress.”

“We said that our conviction was that though the war was still on-going, Nigerians now believed that it was only a matter of time before these evil forces are defeated.