A boy arrived at school with frozen hair this week after walking three miles to school in below freezing temperatures.

The 10-year-old, hit headlines overnight after a photo of his frozen hair went viral and he has now been dubbed “Snowflake Boy”. The viral photo was taken by Fu Heng, headmaster of Zhuanshanbao primary school in Xinjie Township, China, shortly after the boy arrived school to sit for his exams.

Fu said he decided not to reveal the boy’s name but did say that he was one of their third-grade pupils. The photo showing the red-cheeked schoolboy with a full head of white icy hair was taken right after he had stepped into the classroom at the rural school. Classmates can be seen in the photo laughing at the boy’s frozen look. 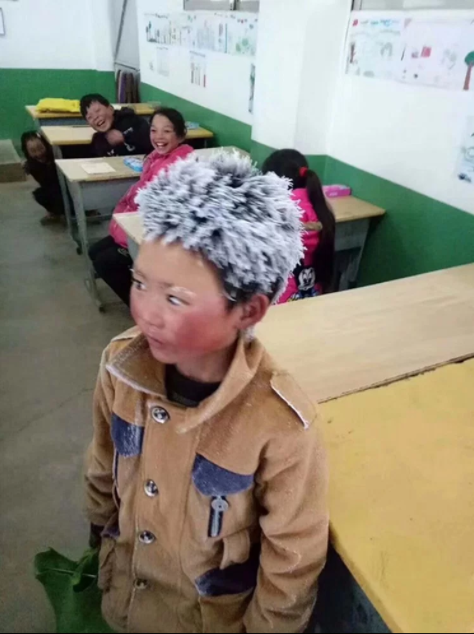 Fu said: “It was the first day of their final exams. The temperatures dropped to minus nine degrees Celsius in about 30 minutes that morning.”

The headmaster said the boy lives a fair distance from the school, and that he is known as the “class clown”, always finding a way to make his 16 classmates laugh.