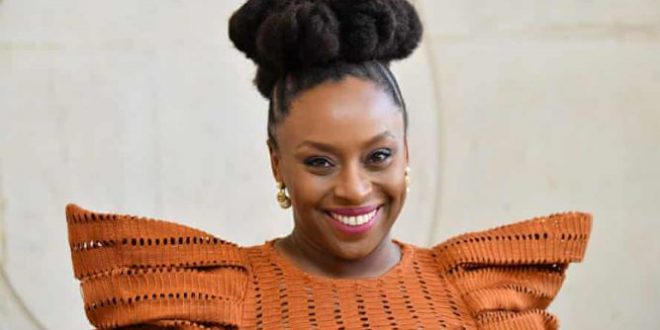 The novelist describes helping two writers who went on to insult her online, and condemns era of ‘angels jostling to out-angel one another’

Chimamanda Ngozi Adichie has written a detailed essay about the conduct of young people on social media “who are choking on sanctimony and lacking in compassion”, who she says are part of a generation “so terrified of having the wrong opinions that they have robbed themselves of the opportunity to think and to learn and to grow”.

Titled It Is Obscene, the essay was published by the Nigerian novelist and feminist on her website on Tuesday night. It attracted so much attention that her website temporarily crashed.

The essay goes into her interactions with two unnamed writers who attended Adichie’s Lagos writing workshop. Both later criticised her on social media for her comments about transgender people and feminism in a 2017 Channel 4 interview, saying “a trans woman is a trans woman”.

At the time, Adichie rejected the claim that she did not believe trans women were women, saying: “Of course they are women but in talking about feminism and gender and all of that, it’s important for us to acknowledge the differences in experience of gender.”

Adichie was subsequently named in the author biography of the first novel by one of the writers. Quoting from emails sent at the time, Adichie’s essay recounts how she asked for her name to be removed from the book, detailing further attacks on social media and how “this person began a narrative that I had sabotaged their career”.

Last year, the non-binary transgender author Akwaeke Emezi tweeted that two days after their novel, Freshwater, was published, “[Adichie] asked that her name be removed from my bio everywhere because of my tweets online. Most were about her transphobia.”

Adichie writes in her essay that she was “very supportive of this writer”, because she believed that “we need a diverse range of African stories”.

“Asking that my name be removed from your biography is not sabotaging your career. It is about protecting my boundaries of what I consider acceptable in civil human behaviour,” writes the author of Half of a Yellow Sun.

On Wednesday, Emezi posted a video on Instagram which partially responded to Adichie’s essay. “I am not going to read what home girl wrote and do like a blow-by-blow rebuttal of it, because I am not even going to read it. Because it doesn’t affect my life,” they said. “I am just going to poke my head in, remind us that we matter, that we are important, that our worlds are fucking bigger than anything that these people can ever imagine and that we don’t ever have to be legible to them. We don’t have to be validated by them.”

The other writer mentioned by Adichie was “welcomed” into the novelist’s life, Adichie writes in her essay, but after the criticism of Adichie’s comments, she “publicly insulted” Adichie on social media.

“It is a simple story – you got close to a famous person, you publicly insulted the famous person to aggrandize yourself, the famous person cut you off, you sent emails and texts that were ignored, and you then decided to go on social media to peddle falsehoods,” writes Adichie.

Adichie finishes her essay with a criticism of “certain young people today like these two from my writing workshop”, describing as “obscene” their “passionate performance of virtue that is well executed in the public space of Twitter but not in the intimate space of friendship”.

“We have a generation of young people on social media so terrified of having the wrong opinions that they have robbed themselves of the opportunity to think and to learn and to grow,” Adichie wrote. “I have spoken to young people who tell me they are terrified to tweet anything, that they read and reread their tweets because they fear they will be attacked by their own. The assumption of good faith is dead. What matters is not goodness but the appearance of goodness. We are no longer human beings. We are now angels jostling to out-angel one another. God help us. It is obscene.”