The first astronauts for China’s new space station have blasted off on the country’s longest crewed mission to date, a landmark step in establishing Beijing as a major space power.

The trio were aboard a Long March-2F rocket for the Tiangong station, where they will spend three months. It is China’s first crewed mission in nearly five years.

Their Shenzhou-12 spacecraft will dock with the Tianhe main section of the space station, which was placed in orbit on 29 April.

The module has separate living spaces for each of them, a treadmill for exercise, and a communication centre for emails and video calls with ground control. 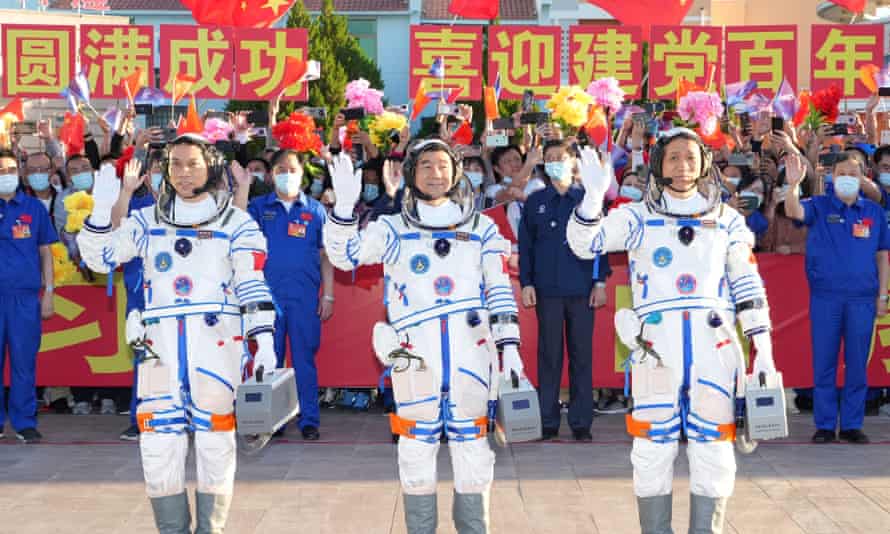 The launch represents a matter of huge prestige in China, as Beijing prepares to mark the 100th anniversary of the ruling Communist Party on 1 July with a massive propaganda campaign.

To prepare for the mission, the crew has undergone more than 6,000 hours of training, including hundreds of underwater somersaults in full space gear.

The mission’s commander is Nie Haisheng, a decorated air force pilot in the People’s Liberation Army who has already participated in two space missions.

The two others are also members of the military.

Over the next year-and-a-half, another 11 missions are planned to complete the construction of Tiangong in orbit.

The first crew will test and maintain the systems onboard, conduct spacewalks and undertake scientific experiments.

China’s space ambitions have been fuelled in part by a US ban on its astronauts on the International Space Station, a collaboration between the United States, Russia, Canada, Europe and Japan.

The ISS is due for retirement after 2024, though Nasa has said it could remain functional beyond 2028.

Tiangong is to be much smaller than the ISS and expected to have a lifespan of at least 10 years.

Spread the love Billionaire Jeff Bezos blasted into space on Tuesday, in the first crewed …