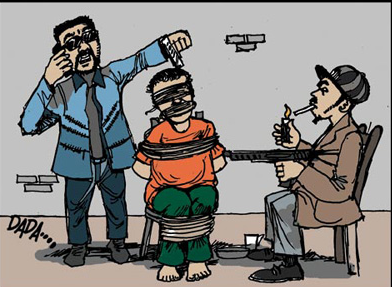 ”I Have No Regrets Kidnapping APC Chairman’s Son”, Says Suspect

A female kidnap suspect, Fatima Muhammed, says she has no regrets kidnapping the four-year-old son of Bukar Dalori, the Borno Chairman of All Progressives Congress.

“I committed the crime because I am in love with money.

“I have no regrets over the crime I committed and even if it is my own child I will kidnap him for money.

“I know he is the son of the APC chairman; I took him because I want money to go and enjoy myself somewhere.

“Why should I regret anything,’’ Fatima said.

Earlier, Mr Damian Chukwu, the Commissioner of Police in Borno said Fatima, was delivered of a baby boy when she was arrested at Albarka Hotel in Maiduguri on September 21.

The News Agency of Nigeria reports that Fatima allegedly abducted the boy and two others from a school and demanded N20 million ransom.

Chukwu said the woman and her new baby child were in good condition as of the time she was arrested by men of the Federal Special Anti-Robbery Squad.

“It is pertinent to mention that Fatima Mohammed was pregnant at the time she kidnapped the minor and gave birth to a baby boy in a Guest Inn while keeping the victim,’’ he said.

The commissioner said that two suspects, Muhammed Musa and Muktar Ali-Shaibu, both from Bulumkutu Area in Maiduguri were arrested in Kano at the point of collecting the ransom.

He explained that the suspects, who admitted the crime, said they did it for the love of worldly things.

Chukwu said that the command was also investigating the involvement of an army major who paid for the two-day stay of the suspect and her victim at the hotel. He added that the manager of the hotel has also arrested.