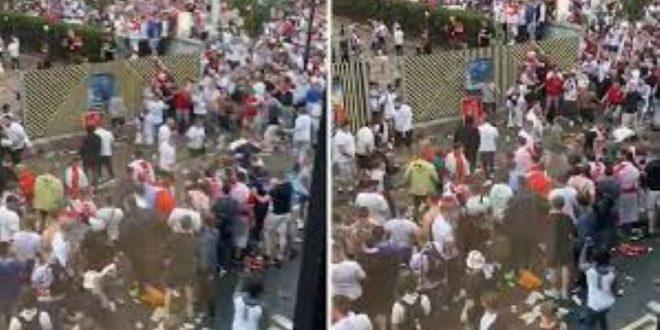 England will face four charges from UEFA following the disgraceful scenes at Wembley Stadium both before and during their Euro 2020 final against Italy.

Supporters were seen fighting amongst themselves, while hundreds who did not have tickets broke into the stadium.

And, inevitably, the English FA are now set to face punishment, with UEFA also preparing to conduct a separate disciplinary investigation to look into exactly how things got so out of control outside the ground.

A statement released by the organisation on Tuesday read: “Disciplinary proceedings have been opened following the UEFA EURO 2020 final match between the national teams of Italy and England (1-1, Italy won 3-2 on penalties), played on 11 July at Wembley Stadium, London.

Charges against The English Football Association :

England will face punishment for the shocking scenes at Wembley ( Image: Action Images via Reuters)

“The case will be dealt with by the UEFA Control, Ethics and Disciplinary Body (CEDB) in due course.

“Separately, and in accordance with Article 31(4) DR, a UEFA Ethics and Disciplinary Inspector has been appointed to conduct a disciplinary investigation into events involving supporters which occurred inside and around the stadium.

“Information on this matter will be made available in due course.”

Despite pleas from Gareth Southgate not to do so, a large number of supporters booed the Italian national anthem when it was played before the game.

Charles Igbinidu is a Public Relations practitioner in Lagos, Nigeria
@https://twitter.com/ionigeria
Previous Tyson Fury rejected second vaccine before catching Covid as he feared the side effect would make him weak
Next Jadon Sancho having Manchester United medical ahead of £73m move