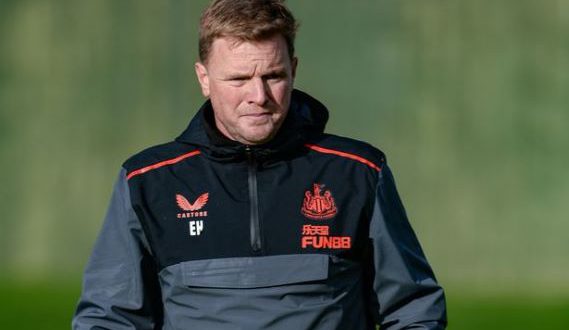 Eddie Howe will be absent for Newcastle United’s Premier League clash with Brentford on Saturday after testing positive for Covid.

Howe told the club’s official site: “I’m very disappointed that I won’t be there with you all at St. James’ Park tomorrow, but it is incredibly important that I follow the guidelines and self-isolate.

“I’d like to reassure everyone that I feel fine, and while this is unwelcome news for me, I know it hasn’t derailed our preparations for what is an important game.

“I have been, and will be, in constant communication with my coaching team and the players, both tomorrow and during the week, and I know they will be giving everything on and off the pitch.”

The 43-year-old arrives on Tyneside knowing he will need to pick up results quickly in order to drive his new charges away from the relegation zone.

The new ownership group have exceptionally ambitious plans, but for Howe, it is about ignoring the noise and getting the best out of a squad that underachieved under his predecessor.

“I have to separate myself from the noise because the noise isn’t going to help me in the job and my dealings with the players, so I think that’s going to be one of the most important factors for me,” he said in his pre-match press conference, prior to contracting Covid.

“I have always prided myself with my work with the players, my interactions with them, the way that I have tried to improve them.

“That can’t change despite the bits of my job now, the demands on my time that are going to be huge. But I have to prioritise, so I think that’s going to be a key thing for me.

“You can sense that it’s a huge job. There’s a real yearning from the supporters to be successful, to produce a team that they enjoy watching – that’s the big challenge ahead for us.”

Charles Igbinidu is a Public Relations practitioner in Lagos, Nigeria
@https://twitter.com/ionigeria
Previous Kamala Harris became the first US female President in history while Joe Biden was under anaesthesia for colonoscopy
Next Jealous woman poured acid over sleeping boyfriend leaving him scarred for life