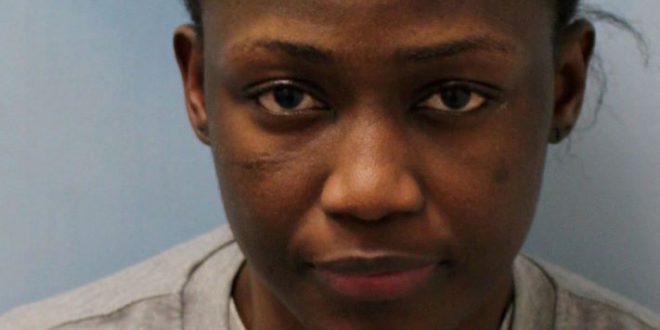 Esther Afrifa, who threw acid in her boyfriend's face after mistakenly thinking he was having an affair has been jailed for 14 years (Image: Metropolitan Police / SWNS.COM)

A woman who threw acid in her boyfriend’s face after mistakenly thinking he was having an affair has been jailed for 14 years.

Esther Afrifa, 28, launched her horrific attack on 27-year-old Kelvin Pogo at their home in Wembley, north London, leaving him disfigured for life and needing months of surgery.

She had bought a litre of sulphuric acid on the internet and left it by her bedside in readiness for the attack, Harrow Crown Court was told.

She first attacked at 3.30am, pouring acid onto his chest which burned through his t-shirt.

Not realising she was responsible, Mr Pogo asked her to call for help before pouring holy water on the injury.

Kelvin Pogo was attacked at their home in Wembley, north London, leaving him disfigured for life and needing months of surgery ( Image: Kelvin Pogo)

But instead of calling 999, she faked a call for an ambulance, blocked his friends from calling and then cancelled a taxi which had beem booked to take him to hospital.

Then while he was resting on the sofa Afrifa launched the next part of her attack, pouring yet more acid on his face a body.

The film student ran out into the street screaming before police found him outside Wembley Central Station suffering from serious acid wounds to his eyes, head, face and upper body at around 9.00am on 22 December 2019.

Mr Pogo told the Standard : “Every day I wake up is like the day she attacked me. It’s like time has stopped.

“Every time there is a knock at the door I’m scared someone is going to hurt me. She used to be my world and she did this to me. I just can’t understand it.”

She had bought a litre of sulphuric acid on the internet and left it by her bedside in readiness for the attack, Harow Crown Court was told ( Image: Metropolitan Police / SWNS.COM)

He was rushed to hospital after receiving vital treatment to help reduce the severity of his injuries by paramedics and firefighters at the scene.

Afrifa was found loitering in an alleyway nearby shortly after the attack and taken into custody before being charged.

Mr Pogo, who suffered life-changing injuries in the attack, has had to undergo months of surgeries and treatment.

Afrifa of High Road, Brent, was convicted of two counts of section 18 grievous bodily harm with intent for her “horrific crime”.

She was sentenced to 14 years’ imprisonment with a three-year licence period extension.

Detective constable Tom Dawood, the investigating officer, said: “The victim suffered horrific and extensive injuries at the hands of Afrifa and has endured months of surgeries and hospital visits since the attack.

“I would like to commend colleagues from London Ambulance Service and London Fire Brigade who attended the scene quickly and provided vital first aid that has undoubtedly reduced the severity of his injuries.

“I am pleased that Afrifa has been brought to justice for her horrific crime and will now serve a significant custodial sentence.”

Charles Igbinidu is a Public Relations practitioner in Lagos, Nigeria
@https://twitter.com/ionigeria
Previous Eddie Howe to miss first Newcastle match in charge after positive COVID-19 test
Next As US President Biden turns 79 today, his Physician certifies him “healthy” and “fit” to be president