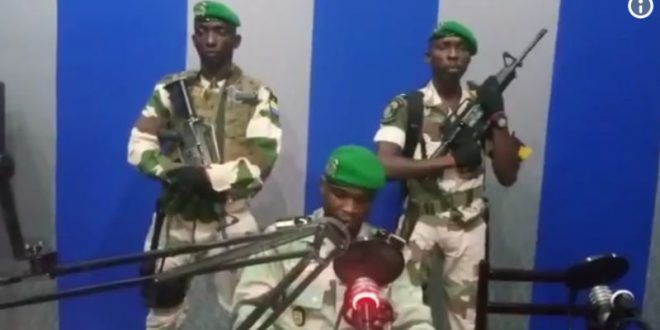 There are reports of military coup in Gabon, as the military seized the state-owned radio station in the capital Libreville and a soldier read a speech, condemning President Ali Bongo’s new year speech.

RFI reported that the military had arrived at the office of the broadcaster at about 4 am local time. Tanks and armoured vehicles can be seen on the streets of the capital Libreville.

Obiang said he was reading a communique on behalf of the army.

The communique said that a New Year’s address by President Ali Bongo “reinforced doubts about the president’s ability to continue to carry out of the responsibilities of his office”.

The government of Gabon have however declared that it was in control.

Stroke-hit Bongo is at present not in the country.

The 59-year-old president is currently undergoing a recovery treatment in Morocco.

President Ali Bongo took over power in 2009 from his father.

He had sought to put an end to the rumours about his health with a televised New Year message in which he said he was feeling fine and was preparing to meet the nation again.

Though he appeared to have delivered his speech effortlessly, media outlets pointed to the fact that the president’s lower body was not shown, thus fuelling further speculation about his ability to perform his duties.

The soldiers said they had been disappointed by the message, calling it “a pitiful sight” and a “relentless attempt to cling onto power.”

The insurgents called on soldiers to take control of the transport system, ammunition reserves and airports “for the good of the country”reports Radio France Internationale.

Charles Igbinidu is a Public Relations practitioner in Lagos, Nigeria
@https://twitter.com/ionigeria
Previous Millionaire father finds out sons he’d raised for 21 years were not his
Next Malaysia king relinquishes throne