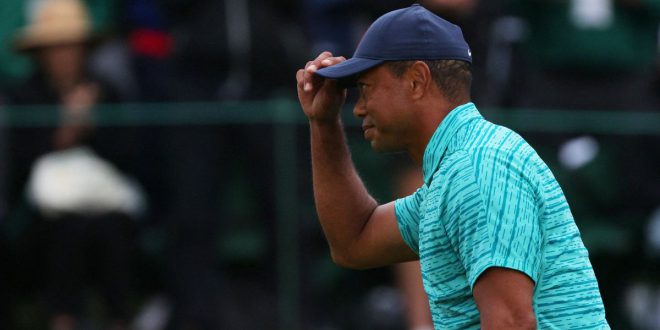 Tiger Woods continued his remarkable return at The Masters after comfortably making the cut, following another solid round of golf during Friday’s action. Woods carded a two-over-par 74 to leave him one-over for the tournament heading into the weekend.

The 15-time major winner made all the headlines after announcing he would make a fairytale return at Augusta, 14 months after suffering severe injuries in a car crash. And following his return Woods hasn’t disappointed, rolling back the years on a number of occasions and entertaining the Georgia crowd, as he has done throughout his career.

The American endured a difficult start in troubling conditions on Friday, after bogeying four of his first five holes. The second round no doubt proved difficult for the whole field, with the Georgia wind gusting around the course. However, Woods soon showed his class and experience.

After a tough start the five-time Masters champion carded his first birdie of the day at the eighth, before then adding another at the par four 10th following the turn. He was dealt a blow soon after though, after carding back-to-back bogeys at 11 and 12 to give two shots back.

In typical Woods fashion though, he soon hit back by adding birdies at 13 and 14, leading to some of the loudest roars from the crowd that the course had heard all week. He then came home with four solid pars to ensure his comeback performance would span into the weekend.

Things however were not so good for his former Ryder Cup teammate Bryson DeChambeau, after the big-hitting American missed the cut after shooting a torrid tournament score of 12-over-par across the two rounds. He revealed pre-event that he was playing against the advice of his doctor after struggling recently with injury.

And these problems continued in Georgia, as the 2020 US Open champion missed his second cut in as many weeks on the Tour. One man who also had his weekend plans dashed was DeChambeau’s rival Brooks Koepka.

Two disappointing three-over-par rounds of 75 let Koepka down, and ensured he would be joining his rival in an early trip home. The brutal conditions proved difficult for even the Tour’s best, with fellow superstar Xander Schauffele also missing the cut.

The Olympic champion looked poised to build on a below average two-over on Thursday to get himself into contention, however more trouble followed on day two as his week ended after a tournament score of seven-over. At the other end of the leaderboard it is newly crowned world No. 1 Scottie Scheffler leading the way.

Scheffler has built on the remarkable start to 2022 that has seen him fly to the top of the world rankings, after finishing the opening two rounds at eight-under-par to lead the way at the halfway stage.

The American put in yet another remarkable performance to leave him five shots clear of the chasing pack.

One man who will be joining the world No. 1 at the weekend is Rory McIlroy, as he played the last seven holes in two-under to leave him two-over for the tournament. The leading European at the halfway point is Shane Lowry as he sits in a tie for second, after an impressive second round sees him see sit at three-under heading into Saturday.

Charles Igbinidu is a Public Relations practitioner in Lagos, Nigeria
@https://twitter.com/ionigeria
Previous Manchester United tell six players they can QUIT in summer as they begin clear-out ahead of transfer spree
Next 50 Cent slams Will Smith’s 10-year Oscars ban and calls it ‘too harsh’