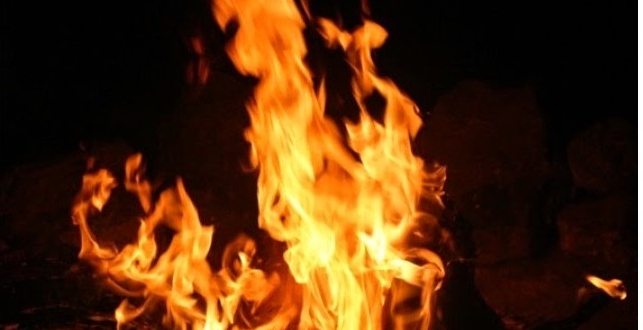 Shocking: No Hope For The Youth In Nigeria – Man Says As He Sets Himself Ablaze In Lagos (Graphic Picture)

A man believed to be in his early 20s Wednesday afternoon, set himself ablaze in the Omole Phase 1 area of Ojodu, Lagos.

The man, whose identity has not be confirmed, was said to had armed himself with a gallon of petrol and lighter and started narrating how Nigerians were going through hardship.

A witness, Ben Chinedu, while narrating the incident said: “I was at Gate when I saw a crowd and I stopped to make enquiries. I saw a young man in his 20s; he was armed with a gallon of fuel.

He was shouting on top of his voice saying that he was tired of life. He narrated how he had been running from one person to other for assistance and everyone was saying things were difficult. He told people who cared to listen that the country was under a spell that cannot be cleansed.

“He said there was no hope and future for the youth, he could no longer bear the ‘suffering-and-smiling’ syndrome and pretence showed by most people. He threatened to kill himself, but people thought he was making empty threats.

He poured the liquid on his body and brought out a lighter. He ignited fire on his body and he was burning. We started pouring water on him, but the fire had done enough damage before we put it out. We called the police who came to the scene and picked the man who was unconscious by then. We don’t know the man and where he came from.”

Police public relations officer, CSP Chike Oti, who confirmed the story, said the man was being treated at the Lagos State Emergency Centre, 7-Up area.

Oti said: “Divisional Police Officer, Ojodu, received a distress call that a man set himself ablaze and raced to the scene with some officers. When the police arrived, they put out the fire and rushed the man to the Lagos State Emergency Centre, where he is being treated.

“it is a suicide attempt as people saw him set himself ablaze. It was not the usual jungle justice by a mob.

“He was the person who planned how to kill himself. The CP has ordered the DPO to investigate and find out who the man is and why he decided to take his life in a most agonising manner. We also call on members of the public who are looking for their missing relations to contact the Ojodu Police Station of the PPRO’s office to ascertain who the man is.”