Home / Life and Style / Save Me from Dying —Nnagbogu, Kidney Failure Patient Pleads 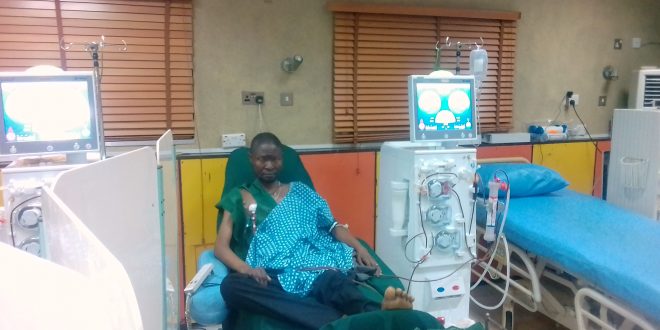 Save Me from Dying —Nnagbogu, Kidney Failure Patient Pleads

In an emotion-laden voice, Joseph Obichukwu Nnagbogu a kidney failure patient has  pleaded with all men of goodwill to  save him from dying as he battles to free  his self from the clutches of this life-threatening illness; a treatment medical experts say will require the sum of thirteen million Naira only, about ($36641.57) for the kidney transplant.

Speaking in his Iju- Ishaga, Lagos, abode recently, the  43years old father of four children explained that his humble appeal stems from his desire to live in order to fulfill his dreams of saving his family from the throes of excruciating hardship.

In his words, I am appealing to all men and women of goodwill to come to my aid as I have lost everything I labored for in life and would not want to lose my life too. He pointed out that the sickness started in the year 2004 when he was diagnosed with diabetes, which according to him graduated with a full-blown kidney breakdown. Since then he added, things; both financially and otherwise have fallen apart.

The pale looking Obichukwu occasioned by the illness further explained that he has been on dialysis since 2016. A treatment he stated that costs him fifty thousand naira (N50,000,00) per day and must be carried out three times in a week; thereby amounting to one hundred and fifty thousand naira, (N150,000,00) weekly.

This situation according to him is made worse as the family can no longer feed and his four children sent out of school since his wife has also lost her job, no thanks to the sickness as she has to be around taking care of him.

He, therefore, fervently prayed the good spirited individuals, corporate organizations, government at both state and federal levels, and donor agencies to come to his rescue as his condition deteriorates daily.

In the same vein, his wife, Ebere who could be reached on; 234-806-768-0889 appealed to all to kindly help in saving her lovely husband from the clutches of death. She added that the current situation her husband is in has shattered the joy in the once happy family and made the future of the children appear bleak.

Donations to this worthy cause could be made via this Access Bank Account details; Obichukwu Nnagbgu, Account Number; 0017582661. while the wife, Mrs Ebere could be reached on  this Telephone  Number;080-676-80889.