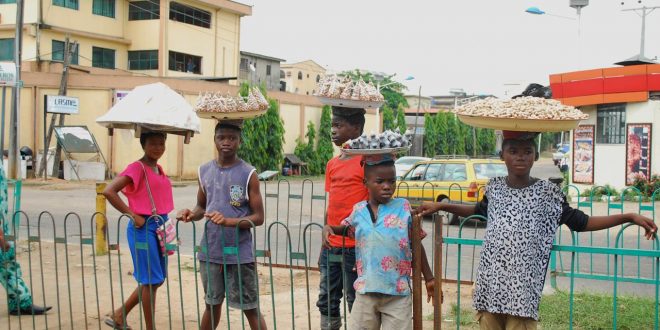 Children who are meant to be in school are seen hawking goods like gala, bottled drinks, and fruits from one part of the city to another. It is far the same in other States of Nigeria. In this exclusive piece, Gbenga Odunsi — an investigative reporter at ionigeria — captures the ordeals of minors who are ill-fated victims of child labor.

Many children are more often than not in the comfort of their homes when night falls. For a number of those who hawk on the streets of Lagos and other big cities in Nigeria to eke a living, it is not the case as they are seen desperately trying to vend their goods. To them, the street is home at all times.

In Nigeria, the number of children hawking on the street is alarming. According to the International Labour Organization, the number of working children under the age of 14 in Nigeria is estimated at 15 million.

In addition, the National Bureau of Statistics (NBS) 2017 Multiple Indicator Cluster Survey (MICS) says about 50.8 per cent of Nigerian children, aged between five and 17, are involved in child labour.

Children conductors and hawkers make up a good proportion of the above analysis. They live in their own world and expand their slangs as the society evolves.

Quite a lot of factors are responsible, but the key one is poverty. Parents who give their children out as house helps do so because of the deteriorating economic conditions. The same goes for parents who send their kids to the street to hawk goods or food items.

It is 1 p.m. on a sunny Monday. Twelve-year-old Muinat ravenously gobbles grains of rice from black cellophane which the seller — who now attends to other customers — served him. Having determined to skip school on this day, in order to make sufficient money, that sacrifice, at great, seems fruitless, having made a paltry N400 since 7 a.m.

A weak, juvenile girl, named Muinat is sent to peddle cashew nuts under the sizzling sun at the time her mates are studying at school. Her parents chose to pride their egocentric interests in material gain at the expense of their child’s safety than supporting her.

An investigation by ionigeria reveals that many of them are not children to some of the owners of the items they vend. These children are usually from far-off places that come to Lagos after their parents were promised that they would get a better life in Lagos through excellent education. Not understanding that after they get to the city, the reverse will be the case.

Seemingly, a number of them are said to be sexually harassed on a daily basis by pedophiles that hibernate under the pretense of buying off whatever they may be selling.

The appalling report is that street trading has enormous health implications for children’s physical and emotional development. Besides, it exposes them to sexual abuse, bodily exhaustion, accidents, death and undernourishment, drug and substance abuse and prostitution. A number of them had been crushed to death by vehicles while trying to cross highways.

In the course of this investigation, it was observed that while these hawkers are going about their businesses, government authorities move towards them either to arrest or restrict them from selling on moving traffic. While they are busy deliberating on whom to advertise their goods to, they are susceptible and at vigilant on which bus from the government authorities would pull over with agents coming against them in full force. They have to scurry and hide, but for those who are unable to escape, the goods they are selling might be seized. 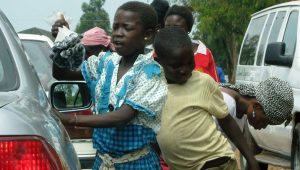 The miles they trek in a bid to sell all they have is shocking. For instance, some of them walk from Berger to Orile carrying their goods on the heads. “I trek from Berger to Orile daily. Then I walk back after I have sold everything,” Onome explained, adding “Mine is even a small thing when compared to the distance other vendors cover on a daily basis.”

It was further gathered that while some of the hawkers get paid meagre amount of money, a few others don’t get paid at all. Onome further explained that she doesn’t get money for transportation yet she walks from to and from Berger. The only plus is that her madam gives her N150 for feeding, and she has a shelter to sleep at nights. According to Onome, she only hawks on Monday to Friday while she rests on weekends.

The high level of various and tedious jobs that children execute in hazardous conditions is perturbing. These jobs encompass being street vendors, beggars, car washers or watchers and shoe shiners. Others work as apprentice mechanics, hairdressers and bus conductors, while a large number work as domestic servants and farm hands. Traditionally, children have worked with their families, but today children are forced to work for their own and their family’s survival.

The money earned by child family members has become an important part of poor families’ income. These children who work suffer from weariness, abnormal attendance at school, lack of understanding and inspiration, improper socialization, exposure to risk of sexual abuse, high likelihood of being involved in crime. These children should be in school but instead, they are in the market hawking food items because their families need the extra income,”

Children conductors in Lagos have, over the years, become a regular phenomenon as the pursuit for survival pervades the metropolis. With the rate of unemployment, alarming poverty rate, family breaks-up, and several other socio-economic issues in the country, innocent children are forced to take up responsibilities which force them to the street early in life. They don’t live; they live under gnashing life-threatening circumstances as hawkers, cart-pushers, beggars, and a good percentage, as bus conductors.

A typical child conductor in Lagos eats anything he sees, roams the streets without hope of a stable abode and takes shelter at night anyplace nature allows — from time to time inside an abandoned car, the top of a pedestrian bridge, the frontage of a shop, beneath a flyover or open spaces by roadsides.

Seated at the pillars of the Lagos-Badagry mass transit rail, the fast movement of his meal from the makeshift plate to his mouth better explains his worry: he has to get back to work or have himself and his brothers go to bed on empty stomach.

Tolufe, adorned in dirty jean on a black shirt, the light-complexioned ‘boy’ noticeably wears the aura of poverty defined by his parent’s neglect. He narrates his experience in Lagos as a conductor.

“I started selling pure water in traffic but the gains were too small. I hardly sell a bag in a day and even if I do, I don’t make more than N50 as I would have drunk from it while some would have busted in the process of running after vehicles. So, in 2016, I joined some friends here and that’s how I became a bus conductor.

“I make between N200 and N300 and I use it in feeding myself and siblings. It would be late before mum returns from shop in the night and when she does, she doesn’t bring food for us.’’

Tolufe’s day is scheduled: He goes to school in the morning, returns to Agege after school to complete the day as a bus conductor. He seems to be enjoying the liberty fate has resorted him to but still hate the fact that he doesn’t make enough to feed himself and siblings

“In this garage, you can never make more than N800 in a day,’ he concluded.

In July 2003, the National Assembly passed into law the Child Rights Act, a legal document that sets out the rights and responsibilities of a child in Nigeria and provides for a system of child justice administration. 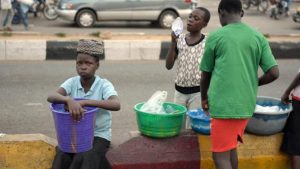 Section 30 (1) of the act states that no person shall buy, sell, hire, dispose of or obtain possession of or otherwise deal in a child, and (2) b; makes it clear that a child shall not be used as a slave or for the practices similar to slavery such as sale or trafficking of the child.

The proposition of this act typically would mean that children are well protected and a breach of such act attracts a penalty of fine of two hundred and fifty thousand Naira but one wonders how the trend of child labor is still on, conceivably on the increase in Nigeria.

Education is key. There is a need for governments at various levels to make sufficient provision for every child to go to school. It is also the duty of government to shield children from being maltreated by their parents and guardians. 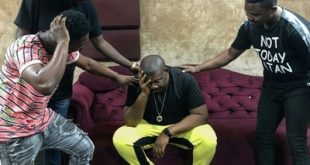