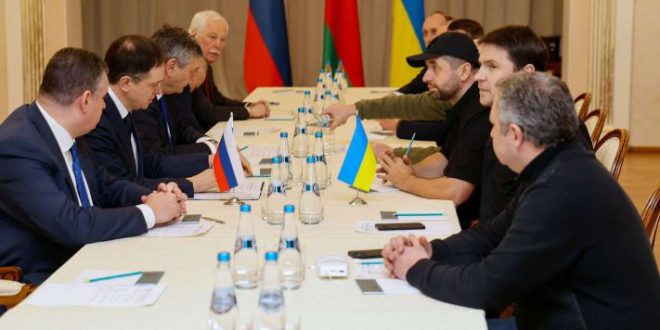 Members of delegations from Ukraine and Russia for peace talks (Image: BELTA/AFP via Getty Images)

Russian and Ukrainian officials gave their most upbeat assessments yet as talk continued with a result ‘days’ away, says Ukrainian negotiator and adviser.

Mykhailo Podolyak, a presidential adviser, said in a video posted online: “We will not concede in principle on any positions.

“I think that we will achieve some results literally in a matter of days.”

He said: “According to my personal expectations, this progress may grow in the coming days into a joint position of both delegations, into documents for signing”

Neither side indicated what the scope of any agreement might be.

The news comes as Russian airstrikes have killed at least 35 people at a military base near the border of NATO member Poland.

The base is where foreign instructors were helping Ukrainians, however it is not known whether they were there at the time.

Foreign military instructors have worked at the Yavoriv International Center for Peacekeeping and Security.

Russian forces fired more than 30 cruise missiles at the Yavoriv military base near Lviv, injuring 57 people, according to Ukrainian authorities as Kyiv warns Vladimir Putin could start “provoking” Nato countries.

Separately, US Deputy Secretary of State Wendy Sherman said Russia was showing signs of willingness to engage in substantive negotiations about ending a conflict in which thousands have died. More than 2.5 million people have fled.

‘According to my personal expectations, this progress may grow in the coming days into a joint position of both delegations, into documents for signing,’ Slutsky said.