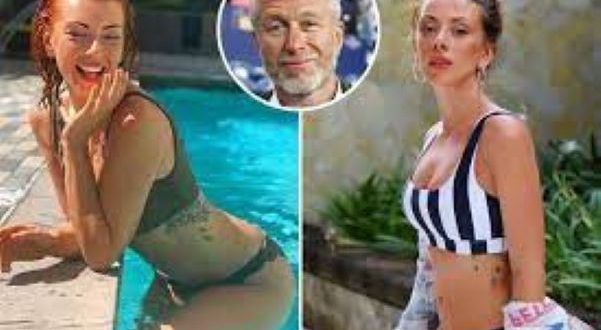 Billionaire Chelsea FC owner Roman Abramovich has been romantically linked to a stunning 25-year-old actress — who has Ukrainian family roots.

The sanctioned oligarch is secretly seeing Alexandra Korendyuk, an entrepreneur and TV star who appeared in the Russian show You’re All P***ing Me Off, it is claimed.

Chelsea FC owner Abramovich, 55 — who was yesterday formally disqualified as a director of the club by the Premier League — was linked to Ms Korendyuk by Russian gossip columnist Bozhena Rynska.

The same journalist first revealed that dad-of-seven Abramovich was due to wed his third wife, Dasha Zhukova — who he was married to from 2008 to 2018.

Alexandra is said to be the founder of the Institute of Music Initiatives, which helps up-and-coming musicians.

Rynska first reported that Red Rom was romantically involved with her last October, four months before the invasion of Ukraine.

“At the beginning of the year, rumours started that the oligarch’s heart had been won over by Alexandra Korendyuk.

“There is very little information about the girl, but it is said that she is the founder of a company in the music industry.

“Abramovich’s date has also tried her hand as an actress.”

She played a hostess in two episodes of the Moscow-based series.
Reports in Russia have said she had a “closed lifestyle”.

Regional experts say her surname links to her having Ukrainian family roots.

A source added: “It is ironic Abramovich has been linked with a lady with a Ukrainian background just as he’s been sanctioned because of the war and his links to Putin.

“It is easy to see what he would see in her and this is apparently a relationship that has been going on for up to a year.”

In 2018, Red Rom was linked to Russian ballerina Diana Vishneva, 45 — with reports suggesting she had “conquered his heart”.

He was said to have become “transfixed” by her dancing performances and used his private Boeing 767-33AER to fly to remote Perm in the Ural Mountains so he could watch her.

But his spokesman dismissed claims of a romance with Vishneva — who is married and later gave birth to a son — as “nonsense”.

It comes as we can reveal Abramovich’s UK homes could be seized — and used to house Ukrainian refugees who have fled the war.

Abramovich was worth £9.4billion before last week’s tough sanctions by the Government.

They have frozen his assets, barred him from making money, and stopped him selling Chelsea — leaving the club’s future in limbo.

Abramovich, whose investment vehicle MHC is run from offices at Chelsea’s Stamford Bridge ground, has dozens of properties in the UK, Russia, US, France and Israel.

His most valuable London property is a 15-bedroom mansion in Kensington, close to the Russian embassy and worth £150million. He also has a three-storey penthouse in Chelsea Waterfront Tower, which overlooks Stamford Bridge and cost him £30million in 2018.

When he divorced his second wife Irina Malandina — mum to five of his children — in 2007, Abramovich is said to have transferred three properties in West Sussex and London to her.

One of those, a five-storey ­Georgian townhouse in Chester Square in London’s Belgravia, is thought to have been used by two of his children recently.

Another of his daughters, Sofia, 27, is said to use the West Sussex mansion and has posted glamorous holiday snaps from the Caribbean.

She also put an anti-war message on Instagram, saying: “The biggest and most successful of Kremlin’s propaganda is that most Russians stand with Putin.”

But the family’s comfortable UK lifestyle is now under threat as ministers draw up plans to seize British properties owned by Putin-linked oligarchs without paying compensation.

Yesterday, the oligarch’s whereabouts were unknown, but his £500million superyacht, Solaris, was tracked to Montenegro.

Abramovich said to have “vetted” Putin when he became Russian Prime Minister in 1999, has vanished from public view with suggestions he is lying low in Moscow.

But there has also been speculation he is in Israel, where he owns a £65million mansion in Herzliya and land outside the capital Tel Aviv.

Abramovich was granted Israeli citizenship in 2018.

He was also granted Portuguese citizenship in 2021 and is said to have been spending time there.

Charles Igbinidu is a Public Relations practitioner in Lagos, Nigeria
@https://twitter.com/ionigeria
Previous Pogba will leave Man Utd at end of season, says personal trainer
Next Russia and Ukraine say there could be ‘a positive result’ to peace talks within DAYS