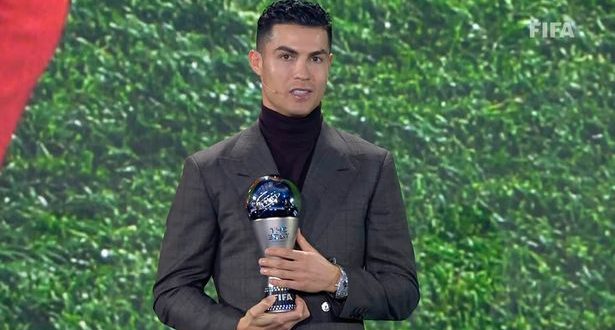 Ronaldo was handed a special award by FIFA ( Image: YouTube/"HANDLE")

REVEALED: Cristiano Ronaldo and Lionel Messi refused to vote for each other in FIFA Best Men’s Player award

Football icons Lionel Messi and Cristiano Ronaldo have a long-standing rivalry and, based on their respective votes at The Best FIFA Awards, it won’t be fading anytime soon

Cristiano Ronaldo’s famous rivalry with Lionel Messi is still as competitive as ever, as neither player voted for one another at The Best FIFA Awards.

Robert Lewandowski picked up the men’s prize for the second consecutive year on Monday evening, just weeks after being snubbed for the Ballon d’Or.

Bayern Munich ace Lewandowski was Ronaldo’s first pick for the prestigious honour, with Chelsea pair N’Golo Kante and Jorginho also on his list.

Messi, meanwhile, voted for his Paris Saint-Germain colleague Neymar to win the award. Kylian Mbappe and Karim Benzema were also included in the Argentine’s top three.

“Obviously, I have two players in my team that I would vote for, [Neymar] and Kylian [Mbappe],” Messi told French outlet L’Equipe ahead of last year’s Ballon d’Or ceremony.

“And then Robert Lewandowski, who has just had a great year, and Karim Benzema, who was excellent.”

Lewandowski’s nomination for player of the year was Jorginho, although he also included Messi and Ronaldo on his three-man shortlist.

Ronaldo and Messi are widely regarded as the two greatest players of their generation, winning the Ballon d’Or 12 times between them.

Football fans are divided on which player is better, with each superstar boasting impressive records.

Ronaldo has scored the most goals in men’s international football, while Messi has played in a World Cup final and lifted more domestic cups.

“I’ve always ignored the Ronaldo and Messi question, it’s a bit of a fantasy and both need to be enjoyed,” said Manchester United legend Gary Neville last September.

“I was asked this morning by a gentleman who was driving me in, ‘If you could pick any player in history to come off the bench and win you a game, who would it be?’

“It would absolutely be Cristiano Ronaldo. I do think he’s the greatest football player that has ever lived.”

Match of the Day host Gary Lineker, meanwhile, insisted in May 2020: “I am a huge fan of Ronaldo, but if you’re talking about the best player ever, there shouldn’t even be a debate that it is Messi.”

Ronaldo has always played down his battle with Messi, insisting they have a good relationship off the field.

But Ronaldo has admitted Messi makes him a better player. “It is a good rivalry that exists in football, but this is no exception,” he explained in August 2019.

“Michael Jordan had rivals in basketball, Ayrton Senna and Alain Prost were great rivals in Formula 1, the only common point between all the big rivalries in the sport is that they are healthy. Messi makes me a better player and vice versa.”

When asked for his opinion on Ronaldo in September 2019, Messi said: “I’ve always said that I don’t have any issue with him.

“We might not be friends because we’ve never shared a dressing room together but I always see him at award shows and there’s no problem.”