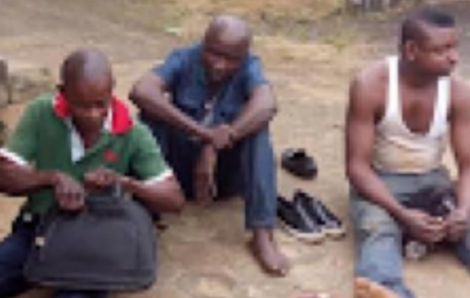 A three-man syndicate who specialized in robbing passengers in the Itori area of Ogun State state has been arrested.
According to a report by Punchng, the suspects, Seun Ademosu, Segun Akinde and Kayode Sokunbi, usually drove around the community, looking for their victims.

The modus operandi of the gang after picking a victim was to stop on an isolated road, saying the vehicle had developed a fault or somone’s finger was stuck to the door.

The unsuspecting passenger would then be robbed of his valuables and pushed out. One Mrs. Kehinde Oluwaferanmi was robbed of N100,000 on October 12 after one of the robbers, Sokunbi, raised the alarm that his finger was stuck to the door. .

The woman did not know they had removed her money in the bag. She reported to the ZIS. After investigation, Akinde and Sokunbi were arrested.

Their gang leader, Ademosu, 28, was later arrested after allegedly leading another gang to steal N1.4m from a cement dealer. The victim was reported to have collected the money from a customer in the Ifo area and was heading for a bank in Ewekoro.