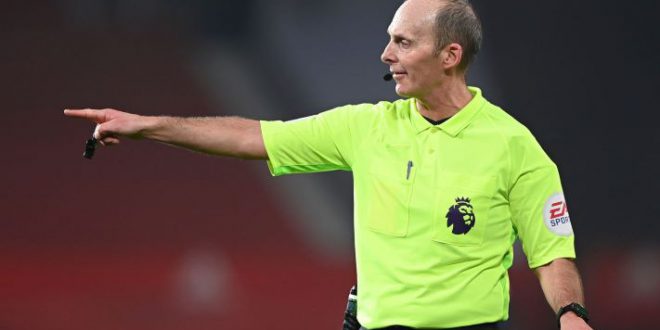 Mike Dean is set to hang up his whistle and cards and end his 22-year career as a Premier League referee at the end of the current campaign.

The 53-year-old is arguably the most recognisable referee currently operating at the top of the English game, with his unique approach making him both highly controversial and must-watch in the same measure. Dean has refereed 553 Premier League matches since his introduction to the top division back in 2000.

He has officiated more games than any of his counterparts and has also dished out more red cards – a tally of 114 – than any of his colleagues. But according to the Telegraph the 2021/22 season is looking to be his final, with Dean ready to call time on his on-field career.

It is suggested that Dean is currently in talks with the Professional Game Match Officials (PGMOL) – the body that governs English officials – to potentially continue as one of just two full-time VAR officials, meaning his sole responsibility would be working from Stockley Park.

Dean was reportedly prepared to quit ahead of last summer’s European Championship, only to be convinced by PGMOL chief Mike Riley to stay on whilst the next generation of match officials built up experience. Dean’s potential departure is one of a glut of experienced officials that could be on the way out of the game, with the likes of Martin Atkinson, Jon Moss and Kevin Friend all over 50.

Lee Mason is currently the only referee to work exclusively behind the monitors, working to overturn and confirm the decisions made in the heat of the game. Dean oversaw the FA Cup quarter final between Manchester City and Southampton, where BBC coverage hinted it could be his final showing in the competition, having been in the middle for two finals previously.

The Wirral-born referee has gained notoriety with players and supporters alike for his unique approach to game-management, often appearing to show professional footballers a level of contempt. Speaking to the Peter Crouch Podcast in 2020, Dean admitted he had a level of arrogance, knowing he was right at the peak of his discipline.

He said: “There’s a touch of arrogance about me when I walk out on the pitch, I know there is. But there’s also a lot of confidence in myself because I believe in my own abilities.

Because of the way I referee, if the ball comes towards me I won’t jump out the way, I’ll let it go between my legs. That’s just how it is. I love a stepover…I do.

“You just do it, I love the job I do and with the way I referee it comes out that I enjoy what I do.”

During that interview he did suggest the end of his career was on the horizon, explaining: “It’s all about my fitness, that’s the problem. The older you get, you don’t recover as quick. I used to be able to do Saturday, Tuesday, Saturday, Tuesday.

“If I do Saturday, Saturday now I’m probably just about right for the Saturday. I’m not as fast as I used to be, I know that in myself. I’ve just got to try and work harder to get in the right position. It’s so hard, the recovery. God knows what I’ll do when I can’t referee again.”

Charles Igbinidu is a Public Relations practitioner in Lagos, Nigeria
@https://twitter.com/ionigeria
Previous REVEALED: Queen of England is on wheelchair and is cancelling engagements because she is ‘very proud’ and ‘doesn’t want to be seen’ struggling
Next Founder of Manchester United fan group in Kyiv killed by Russian invaders with wife and child shot