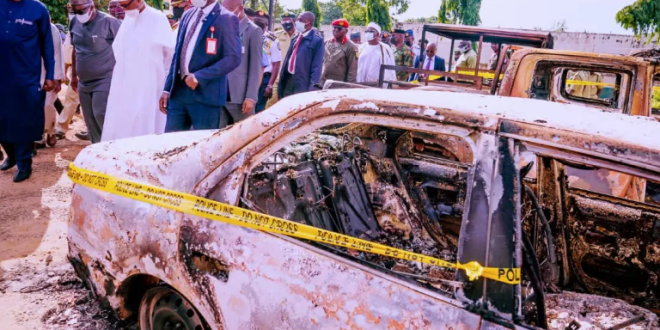 ISWAP Claims Responsibility For Kuje Attack, Releases Video Of Its Men In Action

The Islamic State in West Africa Province (ISWAP) has claimed responsibility for the attack on Kuje Prison in Abuja.

It would be recalled that some terrorists broke into the prison, on Tuesday night, and released over 800 inmates, including high-profile suspects.

In footage on Wednesday night, the terrorist sect showed some of its men shooting their way into the facility.

Tens of fighters were seen marching in groups while vehicles and buildings were on fire in the 38 seconds video.

An elderly man dressed in native attire also joined the young men who were shouting on top of their voices.

The Islamic State’s A’maq Agency released the video with the caption: “Fighters of Islamic State attacked Kuje prison in Abuja yesterday and succeeded in freeing dozens of prisoners.”

The words were written in Arabic.

Tomasz Rolbecki, a Researcher and expert on crises in sub-Saharan Africa, shared the video on his Twitter handle.

When he visited the prison on Wednesday morning, Bashir Magashi, Minister of Defence, said the attackers headed towards the direction where Boko Haram suspects were kept.

Magashi said after the attack none of the 64 Boko Haram suspects in custody could be located.

“The prison is accommodating about 994 inmates and over 600 escaped. Many people have been recaptured and brought back to prison. Maybe by the close of the day, more will have been captured and returned.”

“I think everything is under control. The people who came to do this activity, from the records, we believe they belong to a particular group. Most likely, they are Boko Haram members because we have a sizeable number of Boko Haram suspects in detention, and presently we cannot locate any of them. I think they are about 64 in the prison and none of them now is available they have all escaped,” he had said.

Shortly before his trip to Senegal, President Muhammadu Buhari toured the scene of the attack, where he expressed disappointment with the intelligence system.

“I am disappointed with the intelligence system. How can terrorists organise, have weapons, attack a security installation and get away with it? How did the defences at the prison fail to prevent the attack? How many inmates were in the facility? How many of them can you account for? How many personnel did you have on duty? How many of them were armed? Were there guards on the watchtower? What did they do? Does the CCTV work?” Buhari was quoted to have asked while demanding a full report of the incident.

Mallam Tukur Mamu, the mediator who negotiated release of 11 train attack victims, had said the terrorist who captured the passengers in March were behind the Kuje invasion.