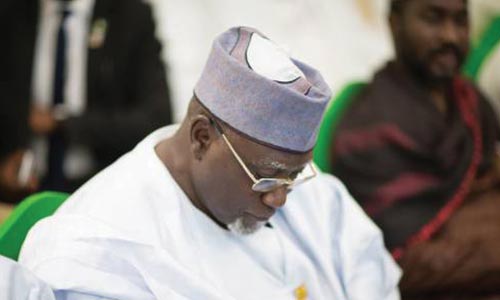 The Department of State Services has issued a disclaimer for former director-general Lawal Daura who was sacked last year, after mounting a blockade of the National Assembly.

In a rare statement on Tuesday by spokesman Peter Afunanya, the secret service agency warned that “any person or group that further engages him or his representatives/associates does so at their own peril”.

“The attention of the Department of State Services (DSS) has been drawn to insinuations and wide speculations that its former Director General, Alhaji Lawal Musa DAURA mni, still controls affairs at the Agency, long after his removal from Office.

“While the Service debunks this false belief, it warns that any person or group that further engages him or his representatives/associates does so at their own peril.

“The Service will not tolerate acts of impersonation designed to undermine it and will decisively deal with person(s), no matter how highly placed, that may engage in such behaviour. The public should, therefore, note this and avoid circumstances under which unsuspecting persons may be deceived.

“On the other hand, the DSS continues to recommit itself to the core values of professionalism, selflessness, vigilance and the rule of law that it has always been identified with”.

Daura was sacked ignominiously on August 7 last year by acting President Yemi Osinbajo, after sending hooded servicemen to block the National Assembly, an action that provoked national and international outrage.