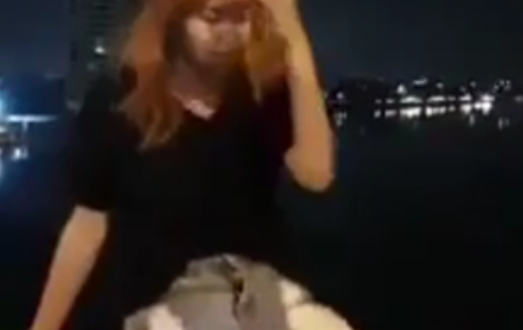 Girl Asks Her Taxi Driver To Livestream Her Committing Suicide

A distressing footage showing an 18-year-old girl committing suicide has gone viral after it was livestreamed by her taxi driver.

The teenager, whose name is given as Ms. Nittaya Sawatdiwan, took a taxi to the Rama 8 bridge then asked her taxi driver to stop and help livestream the suicide.

The taxi driver, Pattharadanai Noomarinart obliged and filmed the young woman as she climbed the railing of the bridge and jumped off it, into the Chao Phraya river in Thailand.

After the video went viral, many viewers criticized the driver for not doing anything to stop her from suicide.

Pattharadanai Noomarinart told police that the girl was crying, drinking and was very upset while complaining about her boyfriend before telling him to take her to the bridge.

He further disclosed that the girl paid him extra money to stay with her and shoot the clip. He said he did not stop the girl from jumping into the river because he did not know she would kill herself.

He was not charged after being questioned by the police.