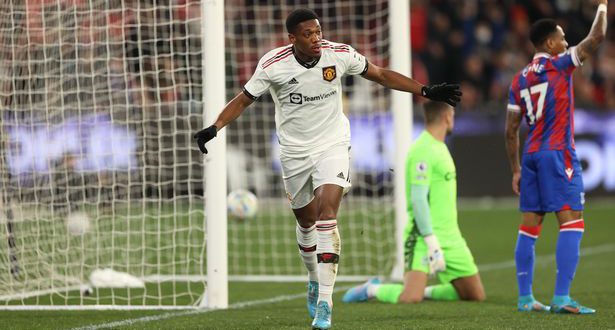 ERIK TEN HAG has blocked the sale of Anthony Martial by Manchester United this summer.

And new manager Ten Hag now sees the French striker as an important member of his squad.

United were ready to listen to offers for the out-of-form player after farming him out on loan to Sevilla last season.

But Ten Hag told club chiefs he wants to keep him and is convinced he can get him firing again.

The Dutchman also had a heart-to-heart chat with Martial, 26, who has been in inspired form on their pre-season tour of Thailand and Australia.

He has scored in all three of the Red Devils’ friendlies, which they have won 4-0 against Liverpool, 4-1 over Melbourne Victory and 3-1 against Crystal Palace.

Martial has subsequently been a changed man around the United camp with a spring in his step having been given this massive vote of confidence by Ten Hag.

The Dutchman believes he can not only get him back to his best scoring form – which came in 2019-20 when he hit 23 goals – but make him even better.

Martial, who has two years left of his current contract and the option of a further year, has been playing as the main striker on tour rather than in a wide role that he formerly occupied for United.

He is now set to start the season there with Cristiano Ronaldo’s future still up in the air.

Ten Hag is also hoping to work his magic on Donny van de Beek – who he managed at Ajax.

Like Martial, Van de Beek was sent out on what proved to be an unsuccessful loan last season, in his case to Everton.

With Ajax, under Ten Hag, Van de Beek was a Dutch title winner and reached the Champions League semi-finals.

The midfielder’s career took a nosedive the moment he left for Manchester United back in the summer of 2020.

Now Ten Hag has told the 25-year-old to go out and grab this fresh opportunity under him at Old Trafford.

Ten Hag said: “Donny has the capability. I have seen it but he has to prove himself.

“It’s the same for every player, he has to do it by himself.

“Me as a manager and the coaching staff around him can do everything to set the right conditions so he can perform but in the end the player has to do it by himself.

“They have to take responsibility for their performance.”

It has been a mystery as to how Van de Beek has not been able to take his Ajax form into the Premier League.

He has made only four Premier League starts for United.

Because of that, he has also lost his place in Louis van Gaal’s Dutch national team.

Now Van de Beek is enjoying the opportunity of working with his former boss who he is convinced will be a success at United as he was at Ajax.

Van de Beek said: “He’s still the same, he will not change as a manager. I see a lot of the same things as at Ajax, I think he can help the team a lot.

“Of course, it’s important you have a good manager but in the end, the players have to do it, we work hard every day, sometimes twice a day, we’re making steps but we’re not there yet.”

Van de Beek is clearly intent on getting involved in the coming season and creating chances for the likes of Martial.

He said: “I can play as a 10, but also an 8. One of my strengths is to come in the box, make a goal or give an assist, but I like to be on the ball as well. I have to play where the team needs me.”