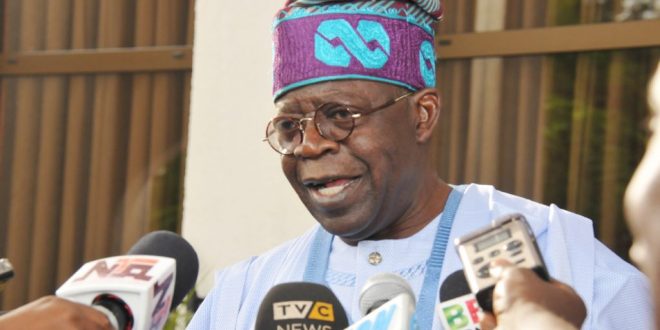 Edo people have taken to the social media to react to appeal by All Progressives Congress leader, Bola Tinubu not to vote for incumbent governor, Godwin Obaseki in coming Saturday’s election.

Tinubu made the appeal in a sponsored broadcast on TVC and Arise TV on Tuesday.

The former governor of Lagos State said, “He (Obaseki) does not deserve any democratic ballot paper. Don’t vote for him, I appeal to all of you.”

However, the preponderant majority of respondents seem not to be swayed by his appeal. It seems to be a wrong strategy on the part of handlers of Pastor Osagie Ize-Iyamu.

You have completely lost it. This is what happens when you associate with touts. Edo people are not slaves…and cannot be your slave. Your media handlers have destroyed you. You will not recover from this. Sorry

Osazuwa Omo Albert
Tinubu Sept 19th go shock you when you see the votes Obaseki will pull, 4+4 torgba. Edoisnotlagos
Seyi Talabi
What is this one saying?
What did he say when the National Assembly was invaded. Is he not the same man that plotted with Buhari to do that? As we speak, a lawmaker has not been sworn in in Kwara State just because he belongs to the PDP. Courts have given orders to no avail. When did did Kote fish speak against that. He thinks we’re not aware?
Did he just call himself the leader of all democrats? From where to where? He was there in 1960 or what? He was the one that died in prison or what? His family were killed by the military? This man is suffering from desusion of grandeur.
Dele Uyiekpen Peter
As a democratic leader regardless of political party, as so alleged and posited in the video, what would have been expected is to speak of a democratic process free from violence, electoral malpractice and other sharp practices. Presenting and speaking for one person, has negated the acclaimed position. In 2016, when APC presented Obaseki, it was not said that, he was not in the democratic struggle, and so, POI should be voted for. Obviously, the persons didn’t change but the parties. It is therefore inconsequential!
Carrington Daro Egharevba
We r going to reject POI and oshomiole your errand boy’s come septmenber 19.
Thieftinubu lack every moral rights n capacity to advise edolite to reject our star boy, Gov Godwin.
Proudly Obaseki n Philips shaibu.
Carrington Daro Egharevba
This video you posted will further damage POI image in edo state, its very glaring that Tinubu and oshomiole has a sinister motives in edo state.
Guess what Edo is for edolite, not for small small lagos godfather like greedy Tinubu and son’s limited.
4+4 Torwagbaaaaa
Tee Akhimien
For tinubu to come this far that means they are really interested in edo state elections and they might have already perfect plans to rig this election because that is what him tinubu oshimole and buhari is known for because no election that has been conducted under apc as a party that has been free and fair they are all broad day rubbery of opposites mandate just like Osun Kano kogi but they will all fail we the people of edo state will reject them just like the way rivers and awke Ibom reject them and God almighty will fight for obaseki haaa I can see the hand writing on the wall wetin obaseki do una self? A true Democrats is when a man chooses his own people over godfathers and personal selfish interests and that is what him obaseki stand for
Iron Banks
Edo people una Don finally hear am… THIEFNUBU say him want make una enjoy the Democracy wey Buhari regime dey give us… So na una hand e dey.. If una like the way Nigeria b now, una go obey una new Oga.
Irabor Steven
Jesus…people with conscience still share this type of message, telling nigerians to be a democrat, should we vote just to please u guys? He said what we are enjoying today.. oh Nigerians why… Why support mediocre.. just listing to the rubbish he was saying.. we should reject him just to please you and fill your pockets at the expenses of the poor masses.. hmm
Austin E Asibor
Nigeria is in trouble,just imagine criminal telling Edo people who to vote for,.If Nigeria is working this man should have been in jail.
Nosa Adams
Tinubu should wait for the shocker on Saturday, obaseki has been endorsed by the people of Edo State. Well, I don’t talk too much, till Saturday.
Carrington Daro Egharevba
Thieftinubu is a poor student of political history in Nigeria, Tinubu forgot so soon how oshomile removed the roof of Edo state House of assembly to prevent pdp House of assembly member’s to Acess the Hallow chamber.
Victor Veelz Chris
A video from a disgraceful godfather who disgracefully made sure a performing governor wasn’t supported by some disgraceful party members. Edolites support and vote for the PDP and Godwin Obaseki
ion Ize-Ehi
Without tinubu, God has shown us who we will vote for on Saturday and we are all ready. No other person but pastor né ósagię…. Please sir tinubu put your Lagos state in order. Fear God like pastor ósagię, Let your own people be proud of you first with evidence then come back to us, thank you!
Itz Starboy
Atiku campaigns for obeseki
U don’t see anything wrong with that
But
Tinubu campaigns 4 Ize-Iyamu and you’re all talking thrash hypocrites
In POI we stand.
Bye bye to yeye governor
Hon V Osagie
This one don smoke
Richy Osr
The Leader has spoken. Sorrow GGO the game is over
Charity Izevbigie
How come that all this things you are saying now about OBASEKI was not said or reither important when he was a candidate under APC platform. Then you and all the people in your click did not know that OBASEKI is not a Democrat? Sir, in politic, growing up is allowed and making a decision not to allow some few individual to mess with you vision is also allowed.
Jim Osasumwen Agboghidi
Is a useless element he taught obaseki is ambode
John Ode
Pls take this post down You can’t use this man to campaign an election, he is a very bad product. I am really worried about the faces i am seeing with and around POI

Bola Ahmed Tinubu of all the Bullion Vans is really desperate about Edo. Edo is not Lagos where pick from councilors to Governor. Governor Godwin Obaseki 4†4, so bring your billion vans Edo people will collect your money and vote Obaseki.