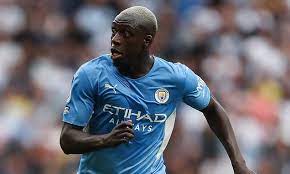 Benjamin Mendy CLEARED of one count of rape against woman, 19, at his Cheshire mansion

BENJAMIN Mendy was today found not guilty of one count of rape during his trial at Chester Crown Court.

The Manchester City footballer, 28, was cleared of the rape of a 19-year-old woman at his home in Prestbury, Cheshire on July 24, last year.

His co-accused, Louis Saha Matturie, 41, was also cleared of two counts of rape and one of sexual assault against the same woman after the prosecution offered no further evidence against the defendants on those four counts.

Matturie wiped tears from his eyes as he stood in the dock and the formal not guilty verdicts – as directed by the judge – were given.

Judge Stephen Everett warned jurors not to speculate as to why the prosecution had decided not to pursue guilty verdicts.

He also urged them to continue “faithfully” trying the defendants on the multiple charges they still face.

Jurors were earlier told of a private video of the woman having sex with Matturie, when she claimed she had been raped.

The mobile phone video was taken by Matturie on August 1 last year, a week after both he and Mendy had allegedly raped the same woman on the same night.

The woman had told the jury Matturie sexually assaulted her for a second time at a flat in Salford on August 1, last year, after clubbing in Manchester.

But the woman denied this, claiming the incident left her feeling “shamed and disgusted”.

The rape charge dropped against Mendy related to a week before the incident with Matturie when the woman alleged after a night out clubbing she awoke at Mendy’s house to find the 28-year-old footballer raping her.

The same night, July 24 last year, Matturie is also alleged to have raped her according to DNA evidence.

But she has “no memory” of that, the court heard and the count was also dropped.

He still faces seven counts of rape, one count of attempted rape and one count of sexual assault against six young women.

Matturie, the footballer’s friend and fixer, is alleged to have had the job of finding young women for sex.

Both men say if any sex did take place with women or girls it was consensual.

The trial was adjourned until Wednesday morning.

Charles Igbinidu is a Public Relations practitioner in Lagos, Nigeria
@https://twitter.com/ionigeria
Previous New malaria vaccine with “world-changing” potential developed by scientists at the University of Oxford. 
Next ASUU: Dealing with a blackmailing Government