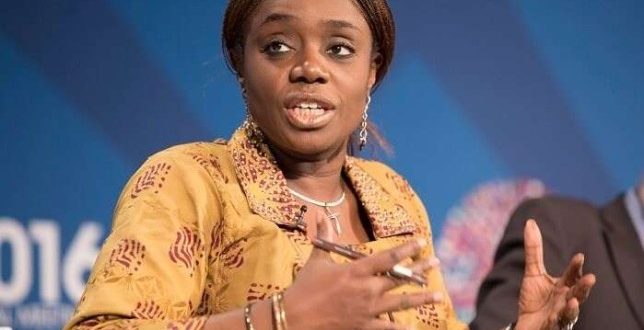 …Tasks Britain Not to Shield Adeosun

The Peoples Democratic Party (PDP) has told President Muhammodu Buhari to stop parading himself as ‘Mr. Integrity”, following revelations that the Federal Government smuggled the disgraced erstwhile minister of finance, Mrs. Kemi Adeosun, out of the country to prevent her from exposing how the Presidency cabal, including close relations and associates of Mr. President, fleeced the nation of trillions of naira.

The PDP further notes that the All Progressives Congress (APC), in congratulating Adeosun, even after she had admitted her culpability on issues of forgery and corrupt practices, has further showcased APC as a party of corruption; an iniquitous fold, where thieves receive medals instead of condemnation.

There are clear evidences that Adeosun could not have circumvented the Department of State Services (DSS), Nigeria Intelligence Agency (NIA), National Security Adviser (NSA) the Police and even the Secretary to the Government of the Federation (SGF) without the tacit approval of the Buhari Presidency.

Furthermore, how did Adeosun evade checks by the Force Criminal Investigation Department (FCID) in Abeokuta and the Ogun State House of Assembly for clearance as commissioner, with her status as a dual citizen, if not armed with inherent tendencies for fraud? It is clear that the Buhari Presidency exploited this factor to swindle the nation, in the finance ministry?

Moreover, the PDP is worried that President Buhari in appointing Adeosun, with her divided citizenship allegiance, to hold the sensitive office of the minister of finance, exposed our nation to the dangers of having our security and economy information sold to international interests.

This, perhaps, explains the anti-Nigeria financial policies, including damaging foreign borrowing negotiations, which have returned our beloved country to a debtor nation.

Until President Buhari brings Adeosun back to explain how the Presidency cabal and APC leaders frittered away more than N10 trillion in 3 years, the Buhari Presidency and the APC lack the moral rectitude to pontificate on corruption as they have become directly complicit.

Finally, the PDP calls on the international community, particularly, the British Government, not to shield Adeosun from facing the course of justice.

The PDP urges the British Prime Minister, Theresa May, to note that Adesoun has already confessed to a fraud in Nigeria and must not be allowed a shelter in her nation.

We also call on the international community to put an eye on all officials of the Buhari administration, including ministers, special advisers and APC leaders as it has become obvious that they are being used to fritter trillions of our national resources while our citizens wallow in poverty, hunger and starvation.