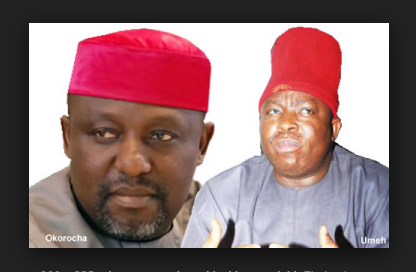 You Are A Failed Legislator – Okorocha Fires Umeh

Imo State Governor, Rochas Okorocha, Tuesday lampooned the former National Chairman of the All Progressives Grand Alliance (APGA) and Senator representing Anambra Central, Chief Victor Umeh for failing as a Legislator who could not find his feet in the Senate.

The Imo governor noted that Umeh’s recent attack against him is a ploy to get cheap popularity, which he said has eluded him since he was admitted into the Senate.

According to Okorocha in a statement signed by his Chief Press Secretary, Mr. Sam Onwuemeodo, “Chief Umeh has turned himself into an interesting Spectator in a Senate he should be a key player or participant. And he has come to realize that being a Party Chairman is a different ball game when compared with being a Senator”.

The statement continued that, “Nigerians have seen that Chief Victor Umeh has not been able to find his feet in the Senate since he was elected into that upper Chamber of the National Assembly. He has been staggering, thinking about which leg to put forward first.

“And for this reason, he has not been getting the kind of media attention he was enjoying free of any charge when he held sway as the National Chairman of All Progressives Grand Alliance, (APGA)”.

It noted further that, “having been starved of media Publicity as a result of his abysmal outing in the Senate, Umeh felt that the only way he could get the needed attention from the media was by attacking Governor Rochas Okorocha and unwarranted too, leveraging on the impeachment moves against the Deputy Governor of the State, Prince Eze Madumere by the State House of Assembly.

“In his recent attack against the Imo governor, he concluded by alluding that “God would impeach Governor Okorocha”. And you begin to wonder where Chief Umeh was coming from especially when one remembers that he has never been heard on the floor of the Senate even for a day, either for his constituents or for Anambra people or for the Nigerian people”.

The statement further stressed that, “as a Party Chairman like that of APGA, he was getting media patronage for certain reasons or on certain issues, but in the Senate, one must be eloquent and articulate on issues to be heard. You need some qualities to prepare motions or bills or contribute meaningfully to debates, unlike his kind of Party Chairmanship.

“He has continued to talk about how he made Rochas Okorocha governor in Imo in 2011 when he could not do that before 2011 and could not also do that after Rochas had left APGA. And he could not do that in any other State in the South-East even Enugu that is closer to him. And in his Senatorial Zone, PDP had produced the Senators until he came up recently.

“Chief Umeh should justify his trip to the Senate. Attacking Rochas Okorocha won’t be an acceptable justification for his inaction. His zone is being ravaged by erosion. He can begin with a motion on that. And nothing stops him from engaging a Consultant since one does not give what he does not have. Finally, we want to ask Chief Umeh to face his Challenges in the Senate and leave Rochas Okorocha alone”.