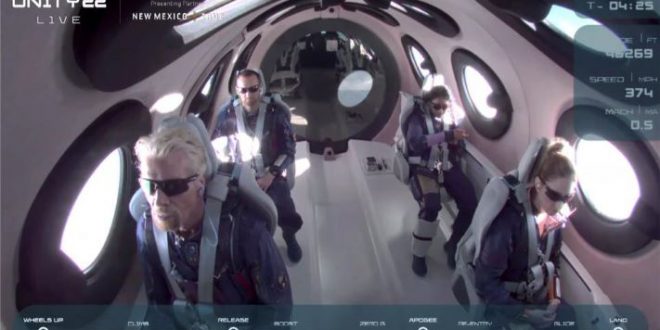 The US Federal Aviation Administration has grounded Virgin Galactic flights as it investigates how Sir Richard Branson’s recent space flight drifted off course during its climb skyward.

The British billionaire fulfilled his life’s dream on 11 July by riding his plane to 85km (52 miles) in altitude.

But the New Yorker magazine has revealed how the vehicle flew for a period outside its pre-agreed airspace.

The rocket plane Unity which carried Sir Richard into space landed safely and Virgin Galactic says it is co-operating with the FAA.

In a short statement, the FAA said it was overseeing the Virgin Galactic investigation of its “July 11 SpaceShipTwo mishap that occurred over Spaceport America, New Mexico.

“Virgin Galactic may not return the SpaceShipTwo vehicle to flight until the FAA approves the final mishap investigation report or determines the issues related to the mishap do not affect public safety,” it added.

In its statement issued before the FAA announcement, Virgin Galactic spoke of “misleading characterisations and conclusions” in the New Yorker article and vowed to push ahead with its flight programme.

Thursday saw it announce details of its next mission – a research flight for the Italian Air Force.

This was likely to be conducted at the end of September or in early October, a Virgin Galactic spokesperson told BBC News.

The New Yorker article was penned by Nicholas Schmidle, who’s written a book about Sir Richard’s near two-decade effort to develop a rocket plane capable of taking fare-paying passengers above Earth’s atmosphere.

Mr Schmidle’s magazine story said the pilots on the 11 July flight – with Sir Richard and three other company employees aboard – received cockpit warnings about the trajectory of their rocket-powered ascent.

Left uncorrected, this shallower than planned climb to altitude could have left Unity unable to reach its landing location on the glide back down to Earth. Mr Schmidle claims company protocols for the cockpit warnings would normally have led to the pilots aborting the ascent.

The company said the pilots had encountered unexpected winds at high altitude and took the necessary actions to complete a safe climb to space and return to Earth.

“Our pilots responded appropriately to these changing flight conditions exactly as they have been trained and in strict accordance with our established procedures,” Virgin Galactic said.

“Although the flight’s ultimate trajectory deviated from our initial plan, it was a controlled and intentional flight path that allowed Unity to successfully reach space and land safely at our spaceport in New Mexico. At no time were passengers and crew put in any danger as a result of this change in trajectory.”

The New Yorker magazine told the BBC it was standing by its account of what happened.

ionigeria.com can confirm that the Unity’s next mission is to be put on hold.

The three men plan to conduct 13 experiments during the flight, and in particular during those few minutes of weightlessness they’ll experience at the top of Unity’s climb.

Under the plan, the Italians are to be supervised in the back of the rocket plane by Virgin Galactic’s chief astronaut instructor, Beth Moses. If and when it happens, it will be her third mission to the edge of space.

After this mission, Virgin Galactic is expected to enter an extended period of maintenance and upgrades for both Unity and its carrier/launch plane, known as Eve.

If the schedule is not disrupted by the latest FAA ban, these vehicles are expected to resume space missions by the middle of next year. The company said one further test outing would be conducted before full commercial service began, probably in the second half of 2022.