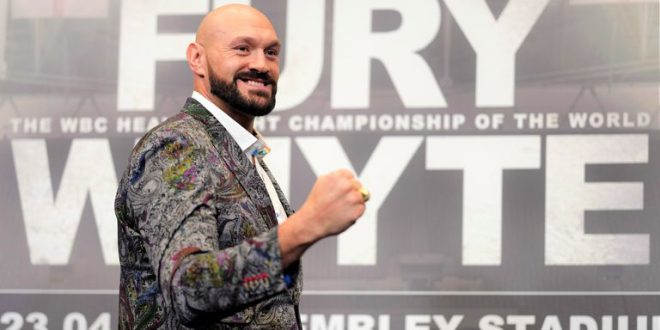 Tyson Fury once revealed he slept with over 500 women and even claims it helped him ‘improve his fitness’.

The 33-year-old has been married to his wife Paris since 2008 and the two share six children together.Ads by

In 2011, he tweeted that ‘lots of sex improves fitness and muscle tone’ a few days before his Commonwealth and British heavyweight title fight against Derek Chisora.

Four years later, he claimed he bedded 500 women during his life but ‘lost count’.

Speaking to Boxing News Online, Tyson said: “I’m a liar, a cheater, a proud, vain person. Everything that’s bad I do or have done. We all make mistakes, don’t we?

“The only thing I ever regret in life is having sex before marriage. If I could erase that then my life would be practically perfect. I regret all the filth that you do with people.

The boxer went on to say how it is ‘pure filth and horribleness’.

“I look at that now as pure disgusting. I’m not a religious person, but I like to help people and do good things. I’m stopping all the bad stuff,” he added.

“I’ve packed in the drinking and going out. I can get up now, go and take the kids somewhere on a Saturday morning rather than being in bed till 12 o’clock.”

Tyson is currently happily married to Paris. The couple first met decades ago – when 17-year-old Tyson was an unknown up and coming boxer.https://get-latest.convrse.media/?url=https%3A%2F%2Fwww.mirror.co.uk%2F3am%2Fcelebrity-news%2Ftyson-fury-admits-bedding-over-26772516&cre=center&cip=16&view=web

Paris, then known as Paris Mullroy, was 15-years-old and like her future husband, was raised in an Irish Traveller family and as a devout practising Catholic.

The two tied the knot in 2008 at St. Peter in Chains Catholic Church in Doncaster, South Yorkshire.

As practising Catholics, Tyson and Paris didn’t have sex until officially becoming husband and wife.

“Even after we got engaged, Tyson would sleep in a caravan at my parents’ home, while I slept inside the house,” Paris has previously explained in the past.

“We didn’t sleep together until after we got married. That is the ­travellers’ way.”

Once married, Paris and Tyson began creating their brood and are now parents to six children together, daughters Venezuela, 11, and four-year-old Valencia Amber, three sons who are all called Prince and the newest edition to the Fury family, Athena – who was born in August last year.

Charles Igbinidu is a Public Relations practitioner in Lagos, Nigeria
@https://twitter.com/ionigeria
Previous ‘Watch Out’, Jonathan Keeps Supporters Guessing On 2023 Presidency
Next Man punched by Mike Tyson identified as a fraudster who has served nearly THREE YEARS in prison