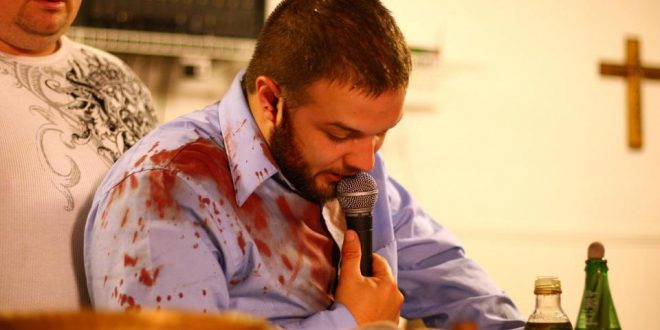 American pastor, Cody Coots, whose father died in 2014 within seven minutes of being bitten by a snake was himself bitten by a snake during Church service and had to be rushed to husband for emergency treatment.

After the bite, Pastor Coots asked his congregation to take him to the mountaintop where God would judge whether he lives or dies. However, a defiant follower took him to hospital instead where doctors told him the snake came close to severing the temporal artery, which would almost certainly kill him.

Big Cody, who took him to hospital, said: ‘Most people bit in the face are dead in five, ten minutes. ‘I mean, his own daddy got bit in the hand and within seven minutes was dead. ‘

His father Jamie Coots died at the age of 42 when he was bitten by a rattlesnake in 2014 at the same Full Gospel Tabernacle in Jesus’ Name church in Middlesboro, Kentucky. The church is inspired by the biblical verse Mark 16:18: ‘They will pick up serpents, and if they drink any deadly poison, it will not hurt them.’ Pastor Cody can be seen with blood all over his shirt before he is rushed to hospital. He’s now started to re-evaluate his life and faith in wake of his brush with death.

Snake-handling churches started appearing in the Appalachian Mountains over a hundred years ago. The death of Cody’s father thrust him into the pastor’s role at the age of just 23 – making him the fourth generation to take up the snake-handling vocation.

Cody said: ‘When the Bible says serpents, it means a poisonous snake. When the old man got bit he died within probably 10 minutes, it’s a nasty bite. ‘Every time he’d ever got bitten, I’d never seen him drop a snake. And I’ve seen the snake hit the floor I thought, “We’ll just take him home”. ‘He walked back to the bathroom and the last words he did say to me was, “My face feels like it’s on fire”. ‘I stepped out of the bathroom and then I heard a scream and when I went back there he just went limp. ‘

Cody’s father Jamie Coots’ was killed in 2014, 60-year-old David Brock died after being bitten at a Pentecostal Church in Kentucky in 2015, and 44-year-old pastor Mack Randall Wolford died after being bitten by a timber rattlesnake during an outdoor religious service in West Virginia in 2012. Incredibly, Mack Randall Wolford’s father – who was also a snake handling pastor – also died from a snake bite almost 30 years earlier.

But Cody and his congregation’s beliefs mean they continue to risk their health – and lives – at their Sunday services. During the services worshippers lay hands on the sick, pray, sing, and listen to sermons led by Pastor Cody, who often picks up snakes from a box and carries one or two of them aloft while he preaches. As the congregation becomes more and more enraptured by the message, they often shout, sing or even speak in tongues, while praising the Lord.

The service reaches its peak when those who feel moved by the Holy Spirit are invited to come up to the front, and handle fire, drink poisons, or hold up the snakes for themselves, while singing and dancing. Around 14 people regularly worship each Sunday, but services can last between 90 minutes and up to five hours, depending on the fervour and intensity of the occasion.

Cody’s wife Tammy, 25, said: ‘That church is their blood, you know. It started with their family and it’s going down with their family. ‘It is not for me. I wasn’t raised in this religion. I met Cody through my dad and we just clicked. I was just, like, crazy over him. ‘Me and Cody didn’t talk about religion until after we got married and all I said is, “God, what did I get myself into?”

‘I do worry that Cody is going to leave this world like his dad did. I don’t ever want that to happen to him because I love him. ‘ The church can be seen as repressive towards women, who are not allowed to wear make-up, and must dress in skirts instead of trousers.

Meanwhile the women are not allowed to preach in church, although they can handle the snakes, hold aloft fire balls, and drink poison if they feel moved to do so during the weekly services, which can sometimes last up to five hours. The first series of My Life Inside: includes films about devil-worshippers in Oklahoma, and teenage girls in Louisiana who go through intricate ceremonies with their fathers in which they pledge to remain virgins until married.