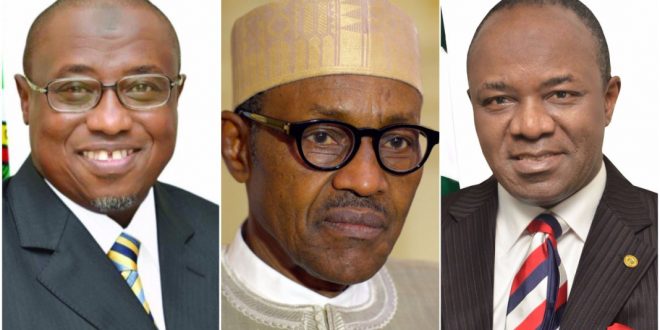 The Nigerian National Petroleum Corporation has denied all allegations of impropriety levelled against it and its group managing director Maikanti Baru by Nigeria’s minister of state for petroleum resources Ibe Kachikwu.

Kachikwu in an August 30 letter to President Muhammadu Buhari accused Baru of humiliating the Board.

Dated a day after the NNPC announced a massive shakeup, which affected 55 management staff, the minister said it was not the first time changes would be made without the Board’s input.

“It is in the spirit of service and absolute belief in your leadership and integrity that I have, after one year of tolerating these disrespectful and humiliating conducts by the GMD, decided to bring these to your attention,” the minister wrote in the letter.

But such accusations were unfounded and “unfortunate”, said Ndu Ughamadu who is Group General Manager, Group Public Affairs Division of the NNPC.

“It is important to note from the outset that the law and the rules do not require a review or discussion with the Minister of State or the NNPC Board on contractual matters,” Ughamadu said in a statement on Monday.

“What is required,” he continued, “is the processing and approval of contracts by the NNPC Tenders Board, the President in his executive capacity or as Minister of Petroleum, or the Federal Executive Council (FEC), as the case may be.

“There are therefore situations where all that is required is the approval of the NNPC Tenders Board while, in other cases, based on the threshold, the award must be submitted for presidential approval. Likewise, in some instances, it is FEC approval that is required.”

He said contrary to Kachikwu’s claims that he was never involved in the 2017/2018 contracting process for the Crude Oil Term Contracts, Ughamadu said the junior minister was expressly consulted by Baru and “his recommendations were taken into account in following through the laid down procedure.”

“It is therefore inappropriate to attach arbitrary values to the shortlists with the aim of classifying the transactions as contracts above NNPC Tenders Board limit. They are merely the shortlisting of prospective off-takers of crude oil and suppliers of petroleum products under agreed terms.

“These transactions were not required to be presented as contracts to the Board of NNPC and, of course, the monetary value of any crude oil eventually lifted by any of the companies goes straight into the federation account and not to the company. Furthermore, contrary to the assertion of Dr. Kachikwu that he was never involved in the 2017/2018 contracting process for the Crude Oil Term Contracts, Dr. Kachikwu was in fact expressly consulted by the GMD and his recommendations were taken into account in following through the laid down procedure.

“Thus, for him to turn around and claim that “…these major contracts were never reviewed or discussed with me…” is most unfortunate to say the least.