Home / News / Local News / Nigerians raise $16,000 for The policeman’s family Who Was Killed In Owerri Robbery: 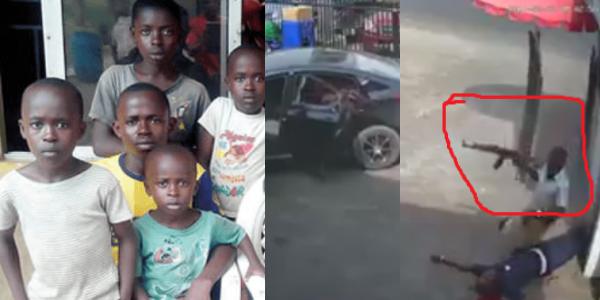 Nigerians raise $16,000 for The policeman’s family Who Was Killed In Owerri Robbery:

In an overwhelming show of love and devotion to a cause, Nigerians from different parts of the world raised over $15,000 for the family of Sergeant Chukwudi Iboko, the policeman that was killed during a robbery in a branch of Zenith Bank in  Imo State.

The feat was achieved within 24 hours of the start of the campaign by PUNCH Newspapers and other social activists in the country, led by Kayode Ogundamisi.

The late sergeant in whose honour the project was initiated, Chukwudi, died on  February 23, 2017 after confronting some robbers who invaded a Zenith Bank branch on Wetheral Road, Owerri.

The late father of eight children, in a 2.58 video clip released in June 2017, could be seen engaging a four-man robbery gang in a gun battle, during which he shot dead one of the robbers.

The video, which went viral on the social media, also captured Chukwudi being shot at by one of the robbers after he ran out of a security post at the entrance of the bank.

Investigation revealed that the victim died a day after the incident.

His widow, Rose, in an exclusive interview, lamented that one of their eight children, Chukwuebuka, died from shock on the day of the father’s burial, adding that the police authorities abandoned her and her surviving children.

She also said Zenith Bank only paid for the burial of her husband.

The News Agency of Nigeria (NAN) reports that the Nigeria Bar Association (NBA) has threatened to sue the Nigeria Police Force and the management of Zenith Bank PLC for abandoning the victim’s family.

Readers had challenged PUNCH Newspapers to create a platform to raise funds for the deceased’s family, with many Nigerians pledging to support the cause.

With the support of some activists, PUNCH Newspapers took up the gauntlet and created a GoFundMe account for the family on Sunday, setting a target of $15,000.

While some of the donors commended the courage of the deceased policeman, others asked the Nigerian government to also support the family.

One Elochukwu Obimdike, who gave $5, said, “You won’t know (what) this feels until it happens to someone that you know.”

Another donor, Tope Fasua, who gave $120, asked that part of the funds should be used to support the other policemen involved in the tragedy.

“Please, let us use this money for the other affected policemen and to put Zenith Bank and Nigerian Police under pressure. Thanks The PUNCH for this initiative. You clocked the amount in one day, plus extra,” he wrote.

Another contributor, Tinu Ojikutu, who gave $20, said, “Your husband and your dad was such a brave man. He was a hero. I pray the Lord continues to comfort you all. God bless you.”

Nigerians, who are willing to make contributions, but could not explore GoFundMe platform, requested that a bank account should be opened in the name of the family for naira donation.

A Twitter user, Morakinyo, @tipsy8701, said she had difficulty donating to the cause through GoFundMe.

“Please, can PUNCH provide a bank account to pay the fund? My payment is not going through on the platform. Thank you,” she tweeted.

Another Nigerian, Stan, with a Twitter handle, @Stannwasky, was also interested in donating, but for the technicality of the online platform.

“Don’t know how to donate through this stuff,” she wrote.

On the GoFundMe page, one Fredrick Obinna-Raymond Chukwuemeka, requested the opening of a bank account domiciled in Nigeria.

He posted, “Please, is there any Nigerian bank account  (in which) one can make his own donation?”

Visitors to PUNCH Online, who read the story on the GoFundMe fundraising for the Ibokos, also wanted to donate in naira.

A poster, with the alias Soulchild, wrote, “PUNCH, how can one donate to this cause? And must I only donate in USD? You are limiting the amount that can be raised by disenfranchising those of us that do not have domiciliary accounts.”

Another reader, identified as Twins, inquired, “Is there an account number one can pay directly into?”

One Moses also indicated interest, saying, “PUNCH kudos. To get more support which many of us want to give, kindly publish a bank account number we can credit in naira.”

Amebo wrote, “PUNCH, please publish the account number to enable my folks back home to make some payment to the account. I have already instructed them to donate some money into the account.”

A Nigerian, who claimed to be resident outside the country, Dike Offor, said he had been following the story religiously and would like to assist the Ibokos.

“Please PUNCH, I don’t reside in Nigeria, but I am up to date with the news in my great country…please, I need the account number of the fundraising for the family,” he said.

Following this, PUNCH Newspapers has decided to open a bank account for the purpose of raising funds in naira for the family.

Meanwhile, The PUNCH and its partners would soon announce three non-governmental organisations that would manage the funds raised for the family to ensure accountability.

Previous Iheanacho: Struggling To Live Up To His Billing
Next Governors’ Removal During State Of Emergency Unlawful –Saraki